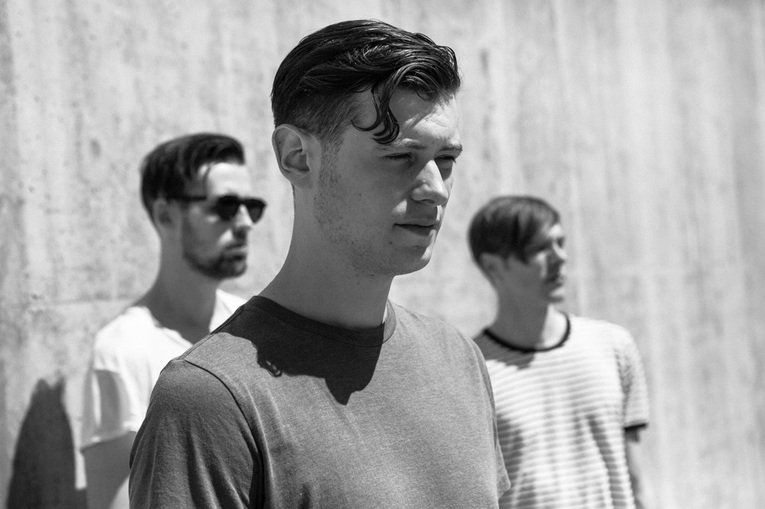 This morning, Omnisound Magazine sat down with Nick Wold, singer and guitarist of DREAMERS. This three-man-band, also comprised of Chris Bagamery on the drums and Nelson on the bass, hails from Brooklyn and brings a unique sound to the indie rock scene. The band has big plans ahead, their highly anticipated debut album is scheduled for release this summer and they will be out on tour through September. Maybe you will recognize them from sharing the stage with some of the biggest names in the music industry today, such as Stone Temple Pilots and The 1975, or from their single “Wolves” which aired on an episode of The Vampire Diaries at the end of April. Check out the interview below to see what DREAMERS shared about their success, a kitten named Lil’ Trucker, and impracticality.

OS MAG: As a fairly young band that came together only about a year ago, you have already toured with Stone Temple Pilots and have played many acclaimed festivals. How does it feel to have had such great success thus far?

DREAMERS: It feels amazing. We are all really grateful and really energized, very excited. We’ve been all seasoned in other bands before. I’ve been working with my manager in a previous band, and the same drummer, called Motives for a few years. That split apart, and this band kinda felt like a second draft where we kinda knew what we were doing a little bit better and it kinda started working out for us. It’s exciting!

OS MAG: You signed to Fairfax Recordings just a few months ago and started recording your first full-length album a few days ago. How has the studio life been treating you so far?

DREAMERS: It’s been great! It’s been nonstop since we came off tour for three months. We’ve been writing every day and now we are in the studio every single day and even doing some writing still at night after the sessions. So it’s been insane but kinda great. The studio is incredible. We’ve been in New York for so many years and now it’s going to be LA, so it’s kinda all a big change.

OS MAG: What was it like have Lil’ Trucker, the kitten you found inside the hood of a truck in Texas during your last tour, on the road with you?

DREAMERS: It was cool! We discovered her unexpectedly in the middle of the night. At first she was terrified, she was scared of everyone, clawing at us. But really quick she became super friendly and she was young enough that she wasn’t traumatized or anything. She loved everyone. We snuck her into hotel rooms. It was kinda a destresser for me actually. I was taking care of her a lot. She was cute as hell.

OS MAG: What are you looking forward to the most during your upcoming show dates on tour with X Ambassadors and then on tour with Young Rising Sons and Hunter Hunted?

DREAMERS: Those are great bands and it’s going to be a really great night of music so I’m excited for that. But more specifically, I’m excited to play the Crocodile in Seattle. I grew up in Seattle and I’ve never played at the Crocodile. It’s just a cool place really.

OS MAG: Are you excited because you are going to be able to play where your idols used to play?

DREAMERS: Yeah, totally! I always like getting to play at venues like that. Like when we played with Stone Temple Pilots at the Fillmore in San Francisco this year, all I could think about was Jim Morrison, Janis Joplin, Hendrix, and stuff all playing on that stage. That’s really cool for me.
OS MAG: Your website is anything but ordinary. I’ve heard that you guys make all the trippy artwork and visuals yourselves. How do these psychedelic, pulsating images reflect or enhance the musical experience you hope to immerse your fans in?

DREAMERS: Yeah, we make it ourselves. I think for us it’s all a big part of the dream thing, even before we came up with the name DREAMERS, we had a lot of lyrics about sleep and dreams. And just the psychedelic nature of reality. I think that creates a good backdrop that kinda shows where we are coming from with it. And it’s also just fun. We like how it looks like a lost, old general website from like 1998. Some lost corner from the internet.

OS MAG: The first line of DREAMERS’ manifesto that appears online states, “We are impractical.” What is the best part of being impractical?

DREAMERS: The best part of being impractical is you’re not down to norms and you can kinda do what is best for yourself based on situation rather than like following any pre-decided path. That’s kinda why we wrote that, it’s good to remind ourselves to be that way as much as we can.

OS MAG: On your website you have a place for people to submit their dreams. How is your ‘dream machine algorithm’ coming along?

DREAMERS: Oh, it’s coming along great! It’s very top secret. Collect the dreams and minds of every person in the world. Create a virtual utopia in space. We’ll get back to you, it’s a work in progress.

OS MAG: Do you remember what you dreamed about last night?

DREAMERS: Yeah, sort of. Last night, I was back in New York with my girlfriend in a taxicab. It was snowy and we were driving to Manhattan with a mentally challenged cab driver. I don’t know, that’s all I remember. I think it’s really weird that dreams you take for granted when they are happening that they are real and that’s just your life. You wake up and then you have to remember your real life… Wait, who am I? Oh yeah.

DREAMERS: That’s a great question. I would say my spirit animal is a whale because they are big and slow and I’m kinda a slow and mellow guy. And also they are mystical and mysterious and intelligent and I like that. And ever since our song “Wolves” has been out, I’ve been noticing wolves everywhere, so there you go, they are trying to be my spirit animal.