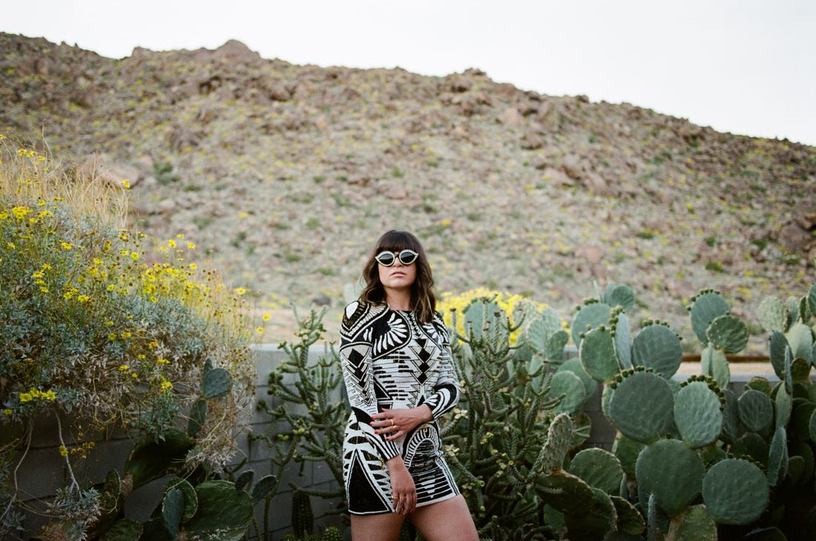 Emily Warren took some time off working on her debut album to chat with Omnisound! The singer and Grammy-winning, multi-platinum songwriter has written for the likes of The Chainsmokers, Dua Lipa, Charli XCX, Astrid S and Shawn Mendes among many others. Included in Forbes’ 30 Under 30 Music Class of 2018, she has put out three singles so far from her debut record which will be released in the coming months. Emily premiered her “Poking Holes” music video earlier this month and we can't wait to see what will be next from her! Check out what Emily had to say about her newest single, storytelling in her songs, her surreal 2017 and where she is headed for what is sure to be a massive 2018!

​OS MAG: You started releasing your first singles in 2017 even though you have been songwriting for many years for others such as The Chainsmokers, Shawn Mendes and Astrid S. What sparked the solo transition for you now, in this moment in time?

EMILY: I actually started in a band, we have ripped those songs off the internet since I started doing other writing, but I’ve kind of always had the bug in me. Then when people started leaving my voice on songs, The Chainsmokers did it first, this song “Until You Were Gone,” and then Frenship left my voice on the song “Capsize,” it sort of felt like an organic, natural moment. Like, alright, if I still want to put songs out, this is kind of the time. The other thing is, there were more and more songs that I would write for a pitch and then someone else would want to cut them and I’d kind of feel like the story was too personal to have someone else sing. When there were a few songs I wanted to hold on to, it was like alright now is the time to start actually doing this.

OS MAG: We love your newest single “Poking Holes!” What was the inspiration behind the lyrics and what was it like shooting the music video with 6 of your childhood best friends?

EMILY: It was amazing! I wrote that song with two of my really good friends Scott Harris and Nick Ruth and we were just having a conversation about what was going on in my relationship and I said the phrase ‘you know, it's poking holes in the situation’ and that's where the song concept came from. The video was awesome! I have always wanted to do a video with my friends in it and once we started doing the choreography, it was just really fun to shoot. So that was amazing!

OS MAG: You are set to have a debut album out later this year. Can you give us any insight to when it might be released and what you have been thinking about as you have been crafting your own record for the very first time? Are there any overarching themes?

EMILY: I think the general theme of the whole thing is that it is my story. I think that when I am writing with other people, I am always trying to get their narrative out of them and help them express that, but this is really my chance to express my feelings on things and what I’m going through. So that is definitely the common thread and I think it has been fun. There is kind of a limit to how much of a hand you have in it when you are writing with other people, like after you leave the studio that day you write the song you’re kind of just leaving it up to them and their teams, which is fine and awesome, but it's just been fun taking things to the finish line now and coming up with the videos and just creatively taking it all the way.

OS MAG: Can you give us any hint as to when the album might be released?

EMILY: I would tell you if I knew exactly, but we are just trying to get the songs done and I am trying to plan a cool experience for the album release and I want to get a few more videos done, but probably like late spring, early summer at this point.
​
​OS MAG: What is a typical day like for you when you are working on your album?

EMILY: It's funny actually because I’m still mostly writing with other people. Besides two or three weeks so far that I have set aside to go write the songs, a lot of it is just squeezing it in when I can. So like the last couple of weeks, I have been going in in the mornings to cut vocals for the songs and been on calls about some of the videos. It's kind of just squeezing it in around my schedule.

OS MAG: You wrote Dua Lipa’s hit track “New Rules” which has been called a feminist anthem, it was a much needed song that was for women by women. I heard that you actually wrote the song with a friend of yours about the experiences they were going through at the time. Can you tell us more about that and how you incorporate this element of storytelling in your songwriting and creative process?

EMILY: I’d say that like 99.9% of the songs I write happen that way. It starts with a long conversation with whoever I am writing with and figure out what's going on, whether its a writer or an artist, like what is happening in their lives. We then make a song about that. To be honest, it's a lot easier when you are drawing from the truth versus just trying to pull something out of thin air. I think also when it’s based on a true situation it tends to be something that is more relatable just because if you are going through something and you are being honest or real about it, there is a good chance that other people have also.

OS MAG: What challenges have you faced being a woman in the music industry?

EMILY: It's a good question and I do get asked that a lot. I think there are not too many challenges just because I think... I mean I’m fighting up against social norms and I think one of the big challenges as a writer and as a female writer in pop music is you want to make sure that you are saying the right thing. You have a responsibility to write a good message, because ideally if it all works out and your song does well, you hope that it's something you actually want little girls all over the world to sing along to. I try to be morally conscious and put that into the writing. I mean that’s “New Rules” to us, I was always told not to write a song where the guy... where there was no hope for the guy, like the guy wasn’t going to ‘get it’ and that really pissed me off when I heard that when I first moved to LA. “New Rules” is not that at all. We kind of just wrote the truth and it’s connecting with a lot of people which is amazing. So I just think as a woman it is sometimes hard, as it is in any industry, to not succumb to some pressures or to feel a little bit powerless because it is a male dominated industry and a lot of people in the positions of power are powerful men. Just like anywhere in the world, just like we are seeing right now, there are a lot of situations in which you kind of have to fight up against that and stand your ground, despite any pressure you might be feeling.
​
OS MAG: What has been your most surreal moment in the music industry so far?

EMILY: That’s a hard question. Everything has kind of been insane. I think the past year has really just been nuts because The Chainsmokers asked me to go on tour with them, which was crazy just because I had just gone from writing behind the scenes to singing in front of thousands of people every night with them for a few months and then we did the Jingle Ball Tour and played like Madison Square Garden and we all went to the GRAMMYs together and got a GRAMMY. Last year has just been completely surreal. What has been amazing has just been like I’m just so happy to be able to be doing this everyday and making songs all the time and just I dont know, I’m having a great time!

EMILY: I think one of my favorite elements about it, especially with writing with other people and I guess too when I turn the light on myself, it's really... if you do it in an honest way, it really can be therapeutic. What I love about writing with other people is that I love pulling that out of them and seeing them get relief from really having to talk about something and really understand it and let it out in a conversation and then put the message in a song that they get to listen to and remind themselves about. I think music, beyond being fun to do and fun to be a part of, is a powerful vessel to get peace with a situation or with yourself or anything that's happened.

EMILY: I love traveling! I feel really lucky that, one, my schedule is flexible so I can do that and also that people are making music all over the place so that I can kind of justify that. Yeah, I like traveling, walking around, going to museums, reading, just hanging out.

OS MAG: What are you looking forward to the most in 2018?

EMILY: I’m definitely excited about my album, more just for fun than anything. I think it has been really cool to have the conversations about the release and the songs and the videos and that's just creatively fun that I get to express myself in that way, but there is a lot of awesome stuff I have written with other people like a bunch more Chainsmokers songs that are coming out that I am really excited about so, just more of the same.

EMILY: That is a good question! I think probably... well my favorite animal is a dolphin, so probably a dolphin because they are emotionally advanced and live in the sea.