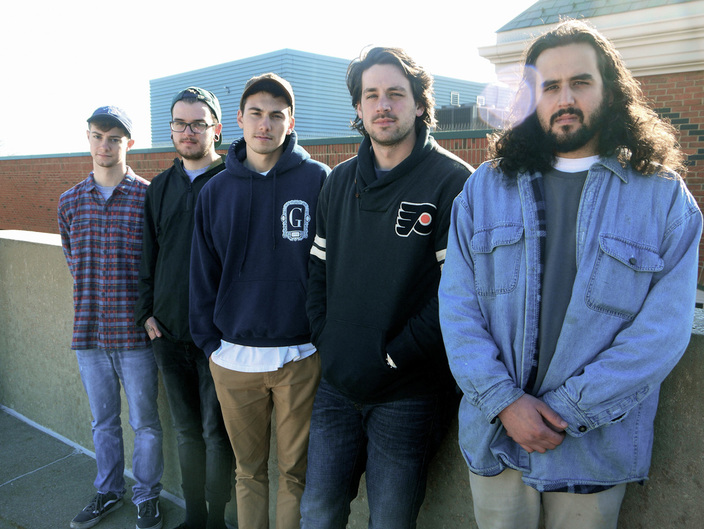 Five-piece pop punk band Grayscale is dropping a new album this February entitled What We’re Missing. The band is based out of Philadelphia and you may recognize them from the music video premiere of their song “Palette” on Alternative Press. Check out what guitarist Dallas Molster had to say to Omnisound about the new record, the band’s songwriting process and a badass bear.

OS MAG: Your new album, What We’re Missing, is scheduled to be released on Feb. 12. Are you planning to do anything to celebrate the album’s drop? Can we expect any tour dates to be announced following the release?

GRAYSCALE: In March we are going to be playing a release show in Philadelphia!

OS MAG: There is no doubt that you can be described as a pop punk band. What sets Grayscale apart from other bands in the genre?

GRAYSCALE: Collin and I try to set ourselves apart lyrically. We have really started writing about things that are hard for us to talk about. Things like divorce and addiction. Something else would be that we really try to write songs like alternative rock band with some tasteful pop punk vibes as far as tempo and rhythmic patterns.

OS MAG: What was it like partnering with Alternative Press to premiere the music video for “Palette”? And what was the motivation behind all the white balloons that appear in the video?

GRAYSCALE: It was really awesome that the people at Alternative Press were into the idea of hosting our release. We have a lot of respect and thanks for them. The white balloons were metaphoric in that they were emotions like happiness and comfort, but through the difficulties of life they were drained to white.

OS MAG: On your website there is a variety of colorfully designed vinyl available for purchase. What is your opinion on physical hard copies of music, such as vinyl and CDs, versus digital copies and online streaming?

GRAYSCALE: Purchasing any music at all in this day and age is a beautiful thing. The thing with vinyl is that it’s not just music at that point. It is a piece of artwork that you can appreciate with your hands and your ears. When you buy a record or a CD, you know that the artist not only put severe amounts of effort into the music but also into the album art, the vinyl color, the insert, etc. I love buying physical copies of records.

OS MAG: What served as the inspiration for What We’re Missing’s album cover art?

GRAYSCALE: A motif of the record is dancing and remembering what it was like to be happy. The album artwork reflects two people who were very much happy in a single moment dancing in car headlights just the two of them.
OS MAG: “Irish Curtains” is the eighth of nine tracks on What We’re Missing. The song takes a very different form than the others on the new album. Could you give us a little insight into what’s behind “Irish Curtains” and why you chose to put it towards the end of the record?

GRAYSCALE: It was a very difficult song for Collin and I to write and record. In its simplest form it is about us trying to keep someone who has severe issues, from ending something that is more meaningful than their clouded head could comprehend. I think we wanted to put it between two very upbeat songs so that it sneaks up on the listener and then makes them kind of go “what was that?” when the next song drops in.

OS MAG: When you aren’t busy recording an album, what do you enjoy doing outside of music?

GRAYSCALE: We really like watching NHL and WWE. Nick has a serious man crush on Dean Ambrose. #ambroseasylum. We also play some serious video games across all consoles. Whether it’s N64 on Xbox one and PS4. We love video games.

OS MAG: What is the typical way you tackle writing a song? Is there a certain process you go through? If so, how has that process evolved with the recording of What We’re Missing in contrast to your previous releases?

GRAYSCALE: Chances are Andy or I will demo out a simple guitar part and we will just start building whether we are together or at our houses alone. From there we will bring Nick in to write out his drum parts. Once we have a somewhat structured track with guitar, bass, and drums, Collin and I will sit down and start writing some lines down. We usually end up chopping or adding bars to a section depending on what Collin and I have to say lyrically. Once all that is done we send it off to Gary and he critiques it. It is a really good process for us.

OS MAG: Grayscale has been gaining an enormous amount of momentum lately. What advice would you give other aspiring musicians that you wish you would have known sooner?

GRAYSCALE: I would tell them to take the chance. Don’t let someone or something hold you back from trying to accomplish your dream if it’s music. Really any dream for that matter. But for younger bands, play every show you get offered and don’t get discouraged if you play to one person. You could very much change that one person’s life.

OS MAG: Thanks so much for taking the time to answer our questions today! I have one last question for you, here at Omnisound, we want to know what your spirit animal is and why?

GRAYSCALE: Thanks so much for taking time to talk with us! I would have to say my spirit animal is a bear. But not a cuddly bear. A badass bear.