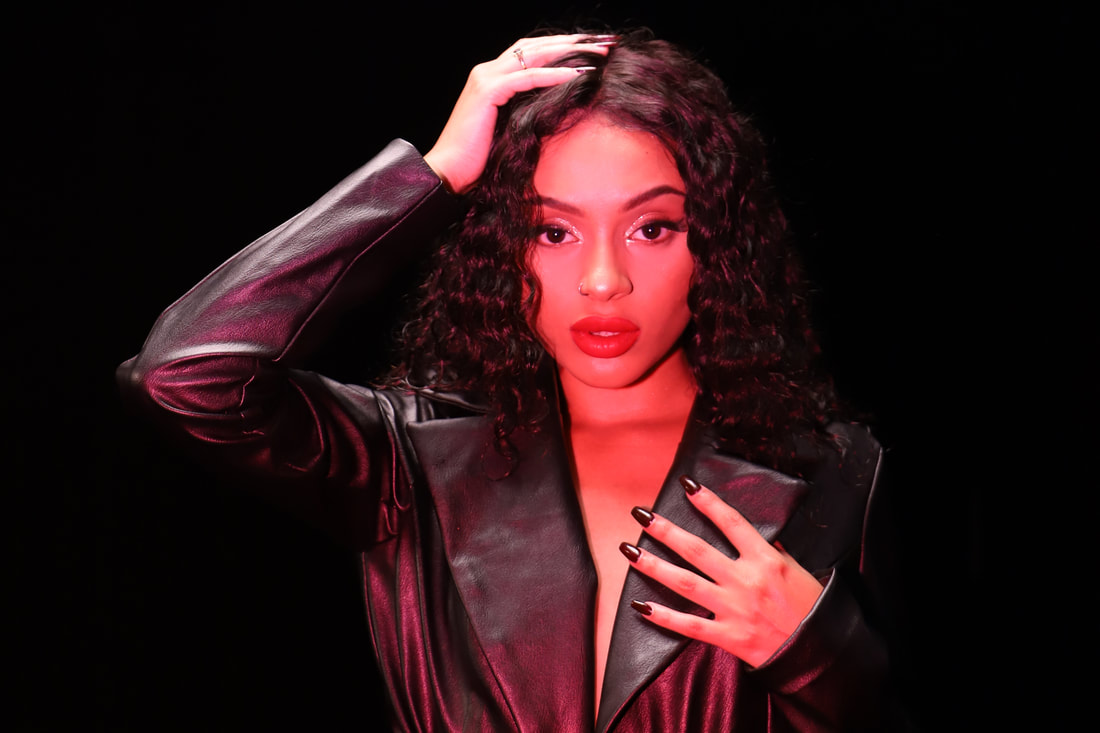 This week, we sat down with Madison Paris, an up-and-coming UK-based singer-songwriter to find out what is in store for her in 2020 after the rave reviews she received for her most recent single, “ETA”.

OMNISOUND MAGAZINE: We love your song "ETA"! What was the inspiration behind your lyrics?

MADISON PARIS: I actually made this song on my first trip to L.A. It was spontaneous and we were super jet-lagged, but it was really influenced by where we were. With the vibes we were in, it ended up being a song with a really dark feeling - like in the video, I kill someone. But, it really was just inspired by the spontaneity of the trip.

OS MAG: What are your currently working on next?

MP: I am working on a couple of songs and a new project, but I can’t say too much about it yet. But, with "ETA", it was as if I had discovered a new part of myself, both sonically and visually. It really unleashed a new level of myself and my persona.

OS MAG: How did “ETA” bring up this discovery of yourself?

MP: I haven’t done music for too long and it takes a lot of time to find your sound. But, with "ETA", it immediately clicked. It brought about this dark, sassy energy that I knew I had, but had never fully shown.

OS MAG: Who are your biggest musical inspirations?

MP: Rihanna has to be the one, 100 percent. I love Rihanna so much - her evolution as an artist and I love her ‘don’t give a fuck’ attitude. Also, I love Alicia Keys, Beyonce and Destiny’s Child; I really just love powerful women.
​
OS MAG: How did you get into singing?

MP: Singing has always been something I loved. I came from a musical family, who played a lot of instruments so it was very present in my life. I got into it by kind of persistently wanting to do it. It was like, ‘If I don’t do it now, I’m going to be 40 and regret it.’ So I had to start somewhere and I started hitting up producers on Instagram. At the beginning, I was terrible at making music. But, in the past few years I have really come into my own. ​
OS MAG: How would you describe your musical style?

MP: Constantly evolving. Experimental. I don’t want to say that I am an R&B artist because I don’t want to confine myself. When I release my project, there are definitely more soulful and jazzy vibes. The sound is sexy, alluring and mysterious. But, the biggest thing is that the sound is mainly just me.

OS MAG: What excites you the most about making music?

MP: You can go into a session with an idea of what you are going to make and then come out of it with something completely different. It’s like starting with a seed growing and then letting it snowball into something great.

MP: I have been on a real spiritual journey where I’ve been stocking up on books. I love reading and meditating, but mostly I do music. I like all things that have to do with mindfulness and spirituality. I like traveling a lot, to Europe mostly, but I especially like traveling on my own. This year, I went to Berlin, Paris, Leon, Marseilles, and Geneva. Some for work and some for quick weekend trips.

OS MAG: Do you have any book recommendations?

MP: There’s a book called ‘Awareness’, by Anthony De Mello and I love it. It’s a really short read, a pocketbook read almost and every now and again I like to read it when I am feeling confused or low. It kind of reminds me of the rambles of an old man with loads on anecdotes and stories.

MP: I am looking forward to having a routine and sticking to it. At the beginning of the new year, everyone has their goals but I am going to learn the piano; I’ve decided. Next year is going to be a great year. I am excited to just grow in general and better myself. I’ve really learned that you have to be optimistic and positive even when life is not how you want it to be.

MP: I feel like my spirit animal is between two. A younger version of me would have said dolphin because I was obsessed with dolphins. I wanted a pet dolphin because they are super intelligent and I loved the seas. Whenever I would go away for trips, I always wanted to go swimming. But, an evolved version of me is really resonating with a snake. My "ETA" video was the first time I encountered a snake and they are very beautiful and misunderstood. Some people may see them as negative, but I really connected with it.

Interview has been edited for clarity.
Interview by Naba Ahmed