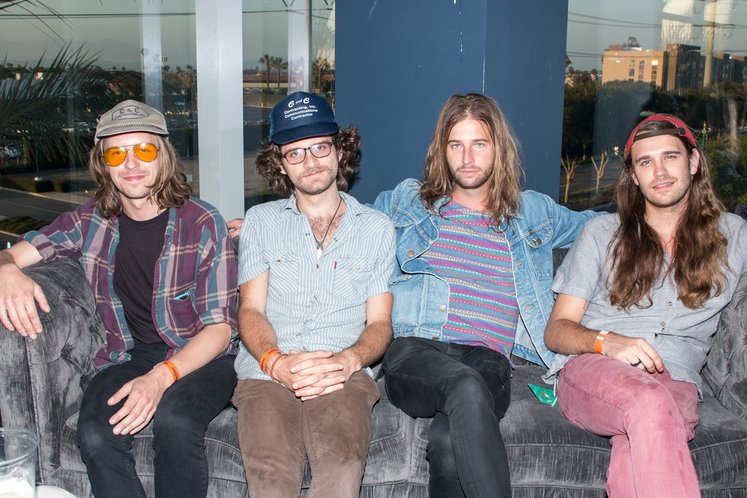 Omnisound talked to Morning Teleportation backstage before their show in Anaheim opening for Modest Mouse on June 2. Kentucky-natives, the band members were excited to be out on the West Coast for a tour. Check out what Morning Teleportation had to say about their latest album Salivating for Symbiosis, collaborating with members of Cage the Elephant and Death Cab for Cutie, and a Chevy 454 with no muffler.

​
OS MAG: Omnisound Magazine will be out covering your set opening for Modest Mouse at the House of Blues in Anaheim tonight. What are you looking forward to the most about this tour stop?

MT: Happy to be in California! We had a blast yesterday. We had the day off today and went to Laguna and kept it going all day.

OS MAG: Your Anaheim show date will be your second stop on tour with Modest Mouse after playing in Phoenix, AZ on Wednesday, May 31. What do you think this tour is going to be like?

MT: It’s gonna be fun! We haven’t toured the West Coast in a while so we’re excited to play out this way. Excited to hear Modest Mouse, their set varies each night. We are shocked that this is only the second show, we have set the bar pretty high for ourselves as far as how much fun we can have. Stoked to see what we do in a week! I hope we don't break before this is over. We’ve been having a good time.

OS MAG: What song are you most excited to perform on this tour? Why?

MT: The classics as classic and the new ones are fresh. The tracks from the new album will be fun to play. “Re-Wiring Easily” I like playing a lot.

OS MAG: Your sophomore album Salivating for Symbiosis was released April 28. How would you describe the album’s sound?

MT: That! What just happened! 454 with no muffler. A little bit different from our other work, more harmonies, more electronic elements, a little bit more synthesized. I still feel like it explores a lot of genres. There is stuff that is almost hard rock and stuff that you could define as fold with electronic elements totally mixed in. A wide variety! Having some of our friends playing on this record definitely changed the dynamic of the songs. Collaborating with Jeremy Sherrer was amazing.

OS MAG: Death Cab for Cutie’s David Deeper and Cage the Elephant’s Daniel Tichenor made contributions to your new record Salivating for Symbiosis. How did these collaborations come about? What was it like to work with these influential musicians?

MT: With Daniel and the Cage dudes, those are just homies. We have done a ton of touring with those guys. I’ve known them since I was 8 years old. There were playing in Portland so Daniel came through one night and put down some bass on “Calm Is Intention Devouring It’s Frailty.” This record also feature Matthan Minster and Nick Bockrath from Cage. They play on “Riot in Time” and “Rocks Gears Desert Truckin.” Before they were in Cage the Elephant, both of those guys actually played in our band too. Nick did a tour on bass. Matthan has done a couple shows on bass, Matthan always sings with us if he’s around or Nick will also play extra guitar with us. Dave Depper is a friend of Jeremy’s so he came in one day and laid down bass for “Salivating for Symbiosis.” It was chill!

OS MAG: What is the inspiration behind your band name Morning Teleportation?

It was a song title. I was hanging out in Portland with Paul and was working on a recording all night and I typed it in as something to save the track as. It ended up on a white board as we were rehearsing and we didn’t have a band name and our friend suggested that we just go with that.

MT: That's a very hard question. I can throw out that I like spontaneity, any moments where you are improvising on the fly and we are all really communicating with each other musically. Totally in the moment makes it extremely exciting. That is what makes it a fun show to see too, and what makes going to see shows fun. It is different every time!

OS MAG: You recently released the music video for “Re-Wiring Easily.” The video is in 360º virtual reality and premiered on NPR. What was the process of making the music video like? Why did you choose to use VR?

MT: That video came about through our friends Tripp and Jenna Watt. They made the first music video and when this record was coming out we sent Tripp the tracks and he picked what song he wanted to work with the video.
​
OS MAG: Outside of music, how do you enjoy spending your time?

MT: Traveling, it goes alongside with the music. Besides playing music, we like biking, reading, skateboarding, drawing, cooking and sleeping late.

OS MAG: What has been your most surreal moment in the music industry so far?

MT: I liked playing Red Rocks, that was really really awesome. When we did Letterman was really surreal. RV Tour with our buddy Cassie who picked up this RV out of a cow pasture that his family had out in Utah. We flew out there to fix it up three days, broke down about 4 or 5 times on the way back to Kentucky. Took it on tour, it broke down some more. Chevy 454 with no muffler on it. We had a trailer behind it and it broke down ever two shows. Head gasket blew up once, we were stuck at a music festival and got towed. We had to completely rebuild the engine. We tied the whole engine down with zip ties, about 400 zip ties to hold the engine into the shafting. Then my friend got rid of that one and we got another RV that worked for about two weeks, we drove it through the Blue Ridge Mountains and it could only go into second gear. So we did from middle of nowhere Pennsylvania again all the way to Louisville, Kentucky going 20 miles per hour on the Interstate. It would not hit the highest gear!

OS MAG: What can fans expect next from Morning Teleportation?

MT: I don’t really know what to expect next. Definitely more shows, recordings, and fewer kittens showing up at the studio. There are too many. They are cute, but there are too many. Anyone want cats?
​
OS MAG: I have one last question for you, here at Omnisound, we want to know what your spirit animal is and why?

MT: The ball with the raccoon tail, the battery powered toy. The Weazel Ball. I picture in a deep meditation walking through the mist of a forest and a swamp with planks that you are walking across and out of the haze is a mechanical Weazel Ball.