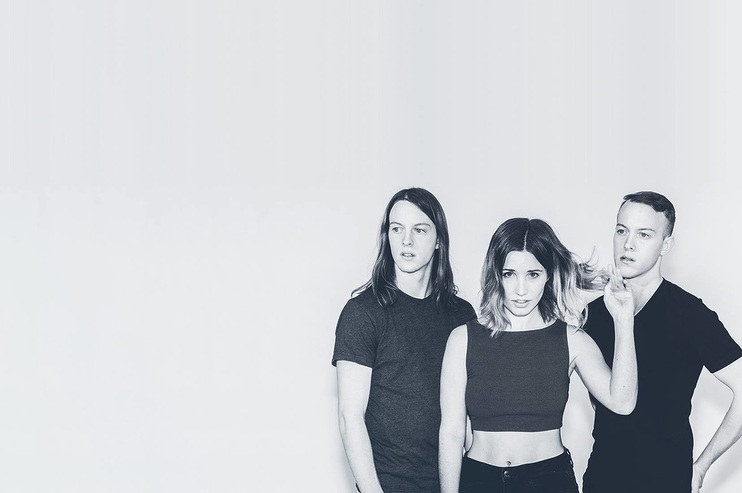 September 13, 2016
​
Omnisound Magazine got the chance to chat with three-piece soulful electronic pop band SHAED, consisting of members Chelsea Lee, Max Ernst and Spencer Ernst, on the way to their Atlanta show. They are currently on a nationwide tour with Vérité and Marian Hill. Check out what the band had to say about their new EP “Just Wanna See,” writing a song in a jacuzzi, and New York Fashion Week.

​OS MAG: SHAED’s 6-song EP “Just Wanna See” was just released on Friday, September 9. When did you guys begin to write your debut EP? Did you run into anything unexpected in its production?

SHAED: We actually started writing the EP pretty recently, all the songs are within the last year. Unexpected things that happened? I mean, not really. We had control over the whole process because it was self-produced so we did it in our make-shift basement studio. It was all made independently so we didn't run into many hiccups along the way.

OS MAG: How did you feel when SHAED was featured on Spotify’s New Music Friday playlist?

SHAED: We were really excited, we love Spotify. To see our song “Perfume” on New Music Friday was a big, big plus.

OS MAG: What has it been like being on tour with Vérité and Marian Hill so far?

SHAED: It's been really great! We have a great van and everyone has been getting along so well. Everyone is very helpful and supportive. It's been a really great experience and we are really excited!

OS MAG: We will be coming out to your show at the Fillmore in San Francisco on September 25. Do you have any touristy plans for your San Francisco tour stop?

SHAED: Yeah! We heard there is some great seafood in San Francisco. Now that we have you on the phone, is there a spot you think we should hit up?

OS MAG: Have you guys been to San Francisco before?

SHAED: None of us have been to San Francisco, actually this is our first nationwide tour so a lot of these cities we have never even been to.

OS MAG: I would recommend going to Fisherman's Wharf and Pier 39, you can get a lot of great seafood there!

SHAED: Yes, we’ve heard that! We are also definitely going to check out the Golden Gate Bridge. The only day we have off on the whole tour is the day after the San Francisco show so we are going to go check out the Redwoods.
OS MAG: How would you describe SHAED’s sound and aesthetic?

SHAED: We have been going with soulful electronic pop. Chelsea has a soulful voice and we try to incorporate real instruments like guitar and piano and stuff into our sound as well, so there is that side of it, in addition to the electronic sounds.

OS MAG: Chelsea, I heard you wrote the chorus of “Running Through The Fields” in an empty jacuzzi. Could you elaborate on that?

SHAED: I was at the beach with my family and we were writing a song at the time. Max and Spencer were working on a beat and some tracks and sent it to me. I was trying to get some privacy from crazy kids that were at my beach house so I went into the bathroom and sat inside the jacuzzi and came up with that melody. There were some good acoustics in that jacuzzi for sure!

OS MAG: Could you explain your ideas behind the “Thunder” lyric video? Why did you choose to feature artists from Washington D.C.?

SHAED: We wrote that song because we live in D.C. and we were really inspired by the energy and the positive feeling of change in D.C. at the time. We wrote it a couple of months ago. We featured a bunch of artists that we were friends with that we were feeling the same way in the video.
OS MAG: What song are you most excited to perform on this tour and why?

SHAED: We actually have a brand new track that we are calling… Actually, we don’t have a name for it. There is a brand new one that we are kinda experimenting with and it's been really fun to see how the crowd has reacted to that and we can kinda change it up on the fly too, that's been the most fun to play.

OS MAG: Last week SHAED performed at the God Save Queens presentation during New York Fashion Week. What was that experience like for you?

SHAED: It was really interesting, we didn’t really know what to expect. We got there and it ended up being a really fun time. We had a really awesome experience. Basically we were the background music for the fashion show, it worked really well with all the lingerie we were seeing from God Save Queens which is a great fashion line. It was really fun, we had a good time.

SHAED: We really love the outdoors. We really love hiking and hanging out in nature. Max and I enjoy rolling sushi, we’ve gotten pretty good at that.

SHAED: I know Chelsea’s spirit animal is a hedgehog, she’s said that multiple times. I don't know why. You can ask her about that. [Chelsea:] A hedgehog because I am prickly sometimes but also cuddly.
​Interview by Nicole White