Review: All Time Low Rocks the Anaheim House of Blues 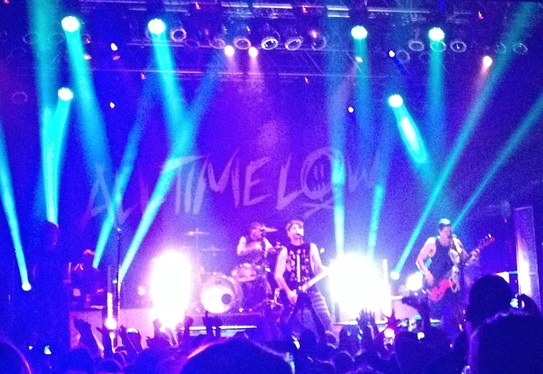 Photo by Nicole White and Review by Jessie Franco

All Time Low
"You’re in class now. No phones, only Rock n Roll."

Opened by Man Overboard and Handguns, All Time Low rocked the Anaheim House of Blues on Saturday, April 12, 2014. They played original audience favorites like “Time-bomb” and “Vegas,” along with some covers of famous 90s rock songs like Green Day’s “When I Come Around” and Lit’s “My Own Worst Enemy”. Adding to the excitement, the band put on a show with comedic banter between members. The dynamic between vocalist, Alex Gaskarth, and guitarist, Jack Barakat, especially got the crowd laughing. The members’ personalities showed through with their spontaneity, making the experience personal and genuine. Adding to the mood, this small venue was the perfect setting. The atmosphere was fun and laid back, perfect for the young audience. The band had a total rockstar presence and it was clear the audience was enjoying it. Called back for an encore, the band played their new hit “A Love Like War,” which features Pierce the Veil’s vocalist, Vic Fuentes. Although Fuentes did not make an appearance at the concert - according to Gaskarth, he was busy flipping burgers - Pierce the Veil’s bassist, Jaime Preciado, came on stage to greet the audience. The crowd erupted and it was clear that this surprise appearance was just as welcomed. All Time Low carried on the encore with their classics, “The Reckless and the Brave” and “Dear Maria, Count Me In.” All Time Low continued their tour with another show at the Anaheim House of Blues the next night, and then moved on to Fresno and Sacramento, closing their time in California. Although finished with their U.S. tour, the band is still playing shows, currently making their way through Europe.