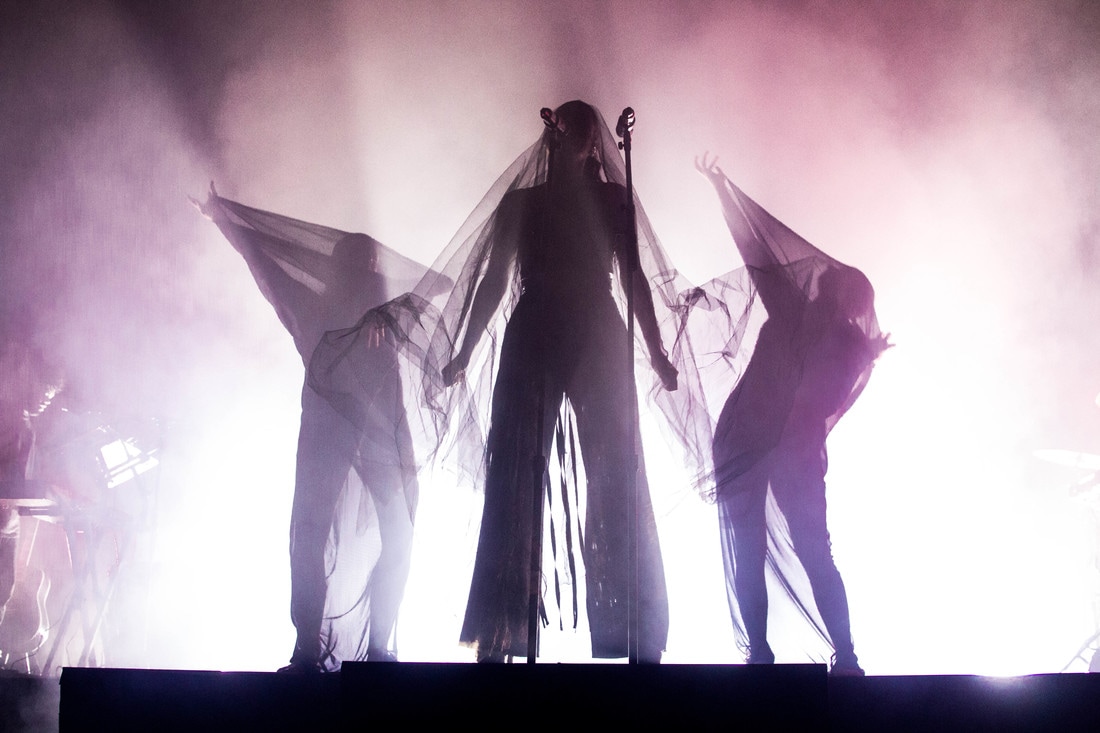 Banks headlined a show at The Warfield in San Francisco in between Coachella weekends on Thursday, April 20. The crowd was lit, in possibly more ways than one, for the sold out 4/20 performance.

The 28 year old Los Angeles native Jillian Banks, best known by her stage name Banks, came out in a veil, back lit by glowing purple lights as her dancers held up the costume for a surreal effect. The two dancers let down the veil and danced on either side of Banks center stage as she sang her opening numbers, all still silhouettes. Within the first few songs, Banks had already played “Fuck With Myself” and “Gemini Feed” which heightened the crowds energy for the rest of her upcoming songs.

Banks later joined in on the dancing which could be described as both demonic and psychotic. Synchronized and perfectly timed, Banks and her dancers thrashed around with precision. She put on a great live performance in regards to the theatrical production of her concert, mesmerizing the audience who couldn’t look away from her captivating essence. Banks made sure to walk around the stage using every inch of it for her performance as she reached out to touch screaming fans hands.

Banks had two live musicians playing live with her on stage and she said it was a big day for them because they are from San Francisco and had a lot of family and friends out at the show. The musical quality of the instrumental backing Banks vocals was lacking in comparison to her recorded tracks. Despite the two musicians liveliness on drums and synths, the sound became muddled and lost in Banks' performance. ​
​
There was talk in the crowd that the pop star was lip-syncing, a bold move for the well renowned artist. With her facial movements, Banks was clearly singing into the mic with the characteristic short-lived vocal runs and wavering tone that she incorporates into her live performance, however the vocals that were projected into the theater did not seem to always match the way in which she was singing into the mic. Still, the cult fandom surrounding Banks’ persona did not seem to pay that much attention to the authenticity of her performance, happy to see their beloved artist dance around the stage regardless.

Including an intro track, Banks played 15 songs before returning to the stage for a two song encore. She played “Beggin for Thread” and “Haunt” before coming back out to perform “27 Hours” and “This Is Not About Us.” It was surprising that she did not play her newest single “Crowded Places” that came out a few weeks ago and already has over 2 million plays on Spotify.

While some left the Warfield ecstatic from being in the presence of Banks, others were left wondering about the credibility behind her music. Nevertheless, the production of Banks’ performance was impressive with symmetrical dance numbers and high energy that kept the crowd on both the floor and the balcony moving throughout the entirety of the show.