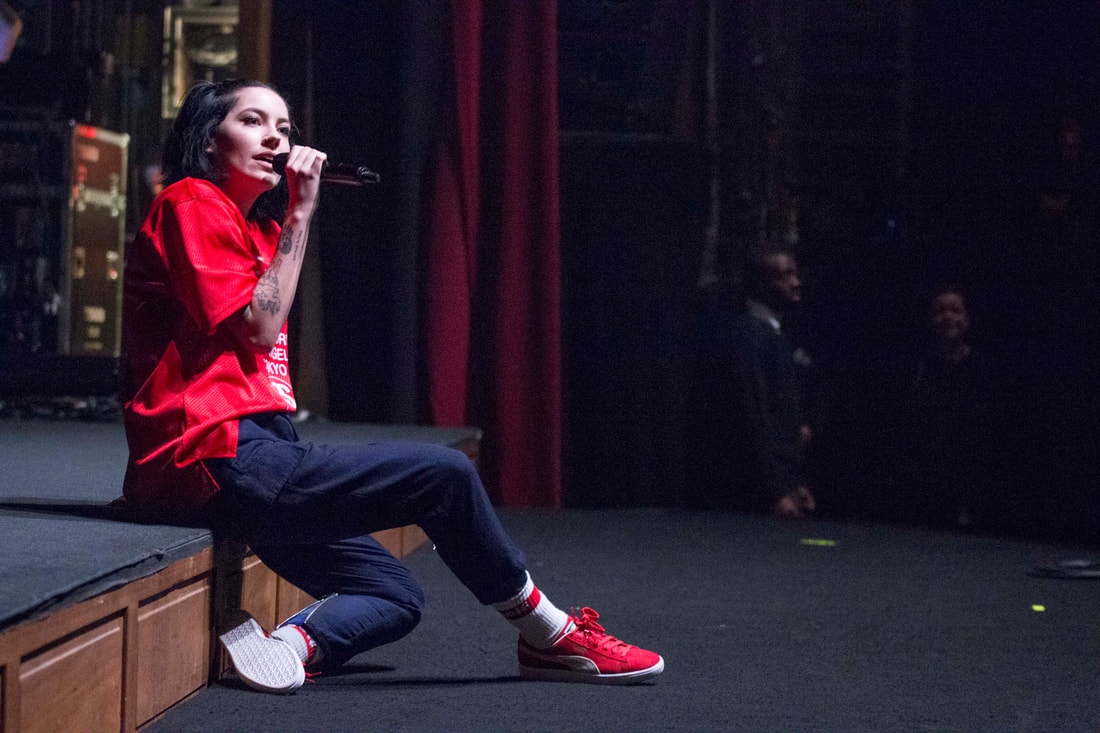 Joywave opened for Bishop Briggs at the Theatre at Ace Hotel in Los Angeles on Wednesday, September 5.

Since the venue was entirely assigned seating across the floor and balcony, Joywave invited the audience to come dance in front of the stage to pump up the crowd. As fans began to pour into the front row, lead singer Daniel Armbruster yelled, “We are breaking the rules!” Addressing audience members who chose to sit in their seats and not stand during the opening performance, Armbruster sarcastically said, “Sit down even harder!” This type of sarcasm continued throughout Joywave's set. The indie rock five-piece band from Rochester put on an energetic set with a refined, crisp sound. They played songs like “It’s a Trip,” “Blastoffff” and “Somebody New” as Armbruster danced around the stage with quick jolting movements, evocative of a punk show in conjunction with the dark onstage lighting. Mid set Armbruster joked around and said he was Bishop Briggs pointing to the headlining artist’s banner behind him. He said, “I’m wearing an Adidas tracksuit so it must be true.” The band ended with “Tongues” which they referred to as the ‘boom boom song.’ Joywave will be back in Los Angeles later this fall for a co-headlining tour with Sir Sly.

As soon as the lights dimmed and Bishop Briggs took the stage, everyone in the audience was up on their feet. After the first song, “The Way I Do,” Bishop Briggs flashed a huge smile at the crowd. Laughing, she said she was so happy that everyone was standing because earlier in the day her sister (who is also her manager) had told her not to be desperate and ask people to get out of their seats. The British singer-songwriter provided an intimate performance, telling stories between songs and inspiring fans in the process. She shared anecdotes about a recent Uber ride, performing at ‘exclusive’ coffee shops three years ago and a show she had played in Los Angeles early in her career with a crowd of only six friends and a stripper pole. The singer has a unique charisma that made her set feel very personal – she wasn’t afraid to share her stories and speak her mind. Bishop Briggs has unmatched energy and ran laps around the stage that would nearly leave her breathless after singing her heart out to tunes including “Dark Side,” “White Flag” and “Tempt My Trouble.” Her powerful vocals were unwavering as they filled the theater and commanded audience attention. Excited to be headlining a show at the Theatre at Ace Hotel, Bishop Briggs said, “This is the most magical night of my life.” She continued, “Evenings like this are surreal to me.” Humbly, the singer thanked all her fans for making this possible. She chose not to participate in the gimmick of going off stage and then reappearing for the encore everyone knew she would play and instead continued through her set. Before going into her second to last song “Baby,” Bishop Briggs scoffed, “This is my first ever love song. It’s gross.” She closed out the night with her hit “River” and the crowd danced the night away.