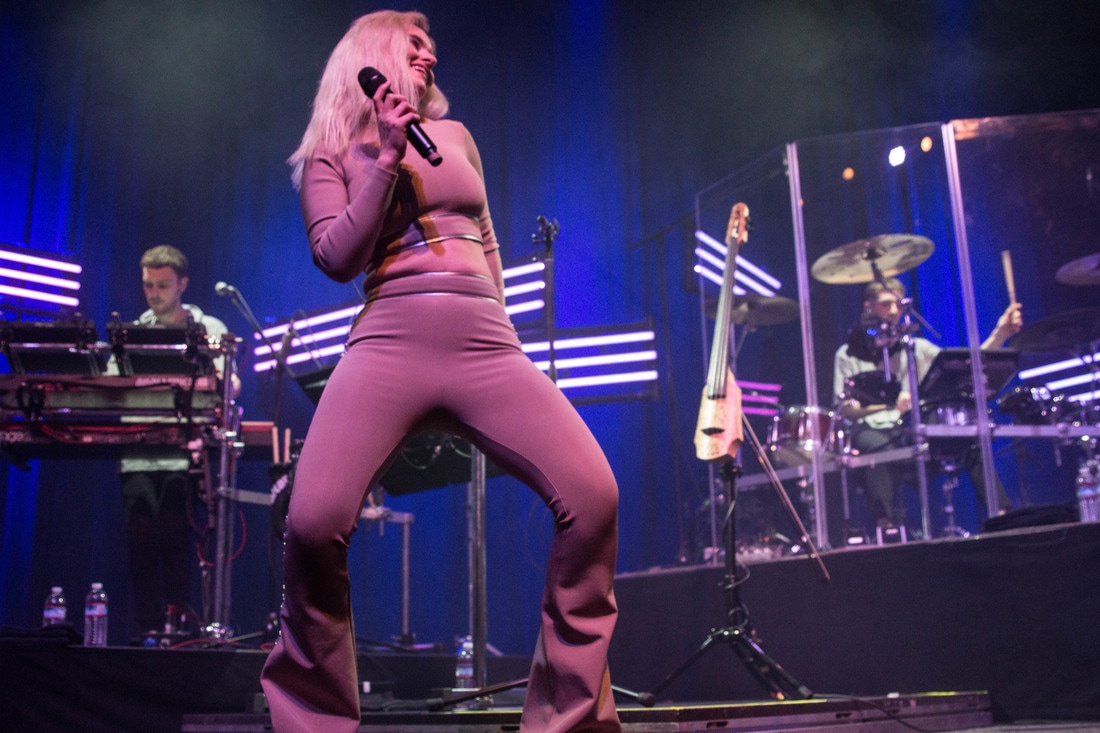 Starley and Zara Larsson opened for Clean Bandit at the Fillmore in San Francisco on April 3. The international superstars are currently on a US tour together through the beginning of May and shows are selling out fast.

Australian singer-songwriter Starley kicked off the night with a fantastic set. Making sure to occasionally shout him out, Starley was backed by her friend Lucas on guitar and keys. She set the tone for the night with high energy, dancing around the stage and encouraging the crowd to jump with her. In addition to performing her original songs, she also played a beautiful cover of “Fast Car” by Tracy Chapman. She told the swaying crowd, “You guys look happy, you guys are cool!”

Starley’s songs tell stories about her life. One song was about a guy she liked, but she soon discovered she missed her chance with him after she saw him happily out on a date with a different girl. Her famous track “Call on Me” is about a time in her life when she thought she was not pretty enough to be an artist, something she had been told when she was young. Starley was depressed and about to quit music altogether despite her calling for it and considered becoming a personal trainer instead, but then she got a little indie deal in Australia and released her first song “Call on Me” which hit it big. She saved the song for last and the audience went wild.

Zara Larsson came out next and went right into her performance by playing hit “Lush Life” right off the bat. The Swedish artist brought four dancers on tour with her, each of them wore black shirts with the words ‘lush life’ printed on them in pink. Despite the intimate feel that the Fillmore provided, the dancers added an extra element to the performance that made the concert seem as if it was taking place in the stadium setting since backup dancers are usually reserved for bigger shows. In between songs, Zara Larsson gave a little inspirational speech encouraging a hate free and inclusive environment, especially in relation to the US. Interestingly, she did a mashup of Ed Sheeran’s “Shape of You” with her own song “Don’t Let Me Be Yours.”

There was a slight intermission in Zara Larsson’s set to allow for her dancers to take the spotlight as they performed routines to popular songs such as “Bad and Boujee” by Migos. Dancing the whole night herself, Zara Larsson came back out and sung more of her songs, backlit by overwhelming pink lights. She pretended like it was going to be her last song until she announced that she still had a few more left. Striking a pose she said, “It’s never really a goodbye, you know with the encores.”

Although Zara Larsson might never forget you, she did forget the words to her most famous song requesting the house to restart the beginning of the track. Thankfully she was not far into the first verse of “Never Forget You” when the slip up happened and the audience did not seem to mind although it was a bit shocking that she could even possibly forget her most acclaimed song. Regardless, Zara Larsson put on a great show that contained a crazy amount of hair flips and got the crowd ready for headliner Clean Bandit.

British trio Clean Bandit brought along two additional singers and a violinist for their tour, all of which were women–talk about girl power! Clean Bandit had it down with a killer lineup of musicians. Although member Grace Chatto played mostly cello and percussion, she did sing a few songs with the other vocalists. Dancing the whole time while singing and getting down low, Chatto was having the time of her life on stage. The band was obviously well rehearsed with their routine. In sync, they busted out the same moves at the same time in perfect unison. The band had Zara Larsson come back out to perform their collaborative track “Symphony” which was surely a crowd pleaser. The audience was extremely lively and there was constant movement to Clean Bandit’s bubbly music.

The band’s live performance really brought out the string sounds from their classical music influence within the pop genre. With chandeliers and all, Chatto said that they loved the Fillmore venue. The two touring vocalists would trade off singing and harmonized beautifully. They had a little shimmy dance to go along with “Come Over.” The band performed a brand new song called “Should’ve Known Better” as a treat for the audience. It started out as a slow ballad and then quickly picked up pace. The track bumped! You know it was good when you could spot Starley in the balcony dancing along as if she was listening to blasting house music in a small club.

Clean Bandit came back out for an encore performing two songs, “Tears” and of course the much anticipated “Rather Be.” When they began to play “Rather Be” the crowd screamed, as if they did not know this song was coming! The excitement was real. After all the hype, all the touring members of Clean Bandit stood center stage to bow and wave goodbye together. As is tradition at the Fillmore, everyone received a free concert poster on their way out, which Clean Bandit enthusiastically posted about on their social media. Overall, it was a great night of music with some of the biggest international artists there are–only to leave fans wanting more!