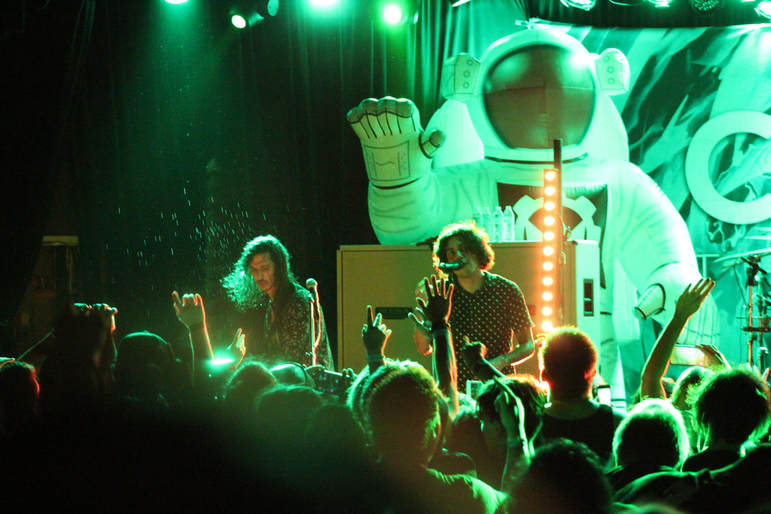 "It's a good day for some rock n roll music, yeah!"
- Andy Leo, Crown The Empire

Out Came The Wolves, Palaye Royale, and I See Stars opened for Crown The Empire as they played a sold out show at The Roxy in Los Angeles on August 2, 2017.

Out Came the Wolves started their set off strong, quickly exciting the audience. However, technical difficulties momentarily halted the show while frontman Cameron Burns filled the silence by talking about how much he hates technology. Once able to continue, the band played on with the same energy that started their set. Burns tried a few times to get a circle pit going in the crowd. Although he was unsuccessful in his attempts, the audience danced in place with their hands in the air.

Next to take the stage was Palaye Royale. The small venue provided a personal feeling to the show as well as tremendous heat. Lead singer Remington Leith commented on this saying, “Gotta say, I’ve never been in a sauna this big before.” In between sets people swarmed to the doors trying to get any fresh air they could. During the set, however, sweaty bodies jumped up and down as the band played original songs as well as a cover of “Teenagers” by My Chemical Romance.

With a dramatic entrance, I See Stars came on next as a few lights lit up a dim stage. Clearly a crowd favorite, the band jammed on stage while in the audience, everyone was singing and waving their hands in the air.

As the crew got the stage ready for headliner Crown the Empire, a surprising amount of audience members left the show. Whether they had come for I See Stars or whether the heat finally got to them is unknown, but by the time Crown the Empire was onstage, the crowd had shrunk by about thirty percent. The curtain rose and revealed an outer space themed set. With big blow up astronauts, the band rocked out while a mosh pit started in the audience. The set consisted of classics like “Machines” and “Millennia.”
View Full Photo Gallery