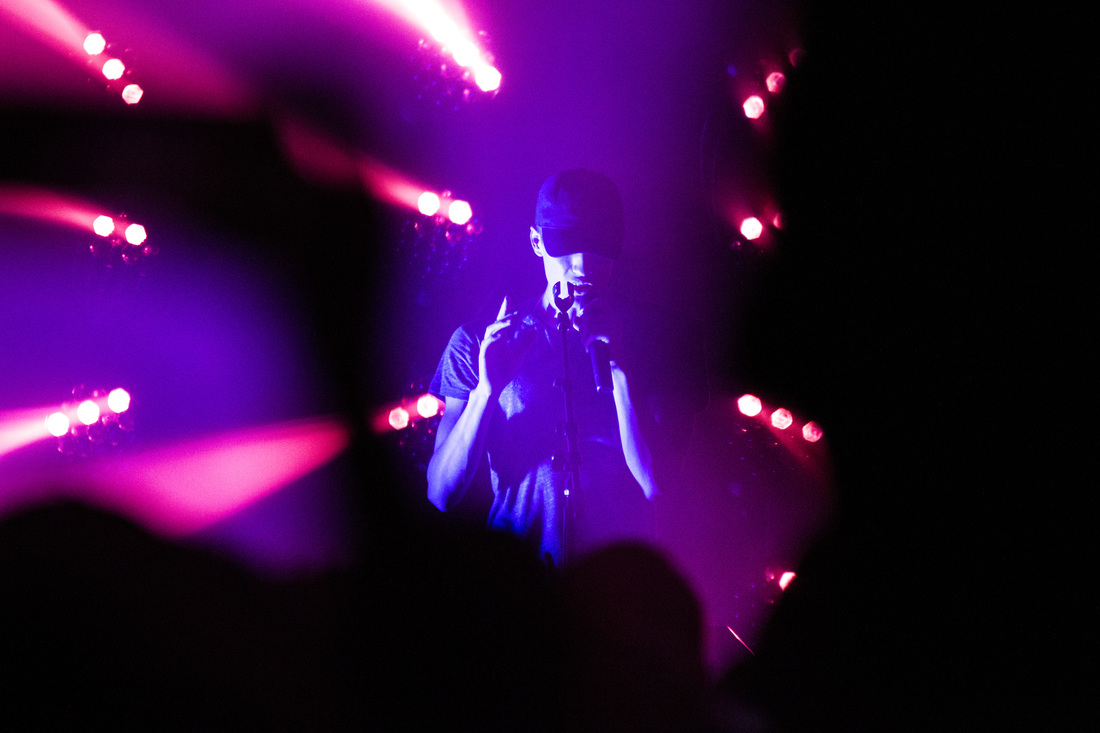 Photo by Nicole White and Review by Gina Kuhlmann
September 14, 2016

The screen, playing a distorted version of Willy Wonka and the Chocolate Factory, lifted at Slim’s last Wednesday night as Lontalius took the stage. Lontalius’ calm electronic sound and honest emotional lyrics moved the crowd. Wearing a shirt that asked “would your fifteen year old self be proud of you now,” the nineteen year old’s songs struggled to comprehend love, relationships and adolescence. Between shortened versions of his songs, including “All I Wanna Say,” he charmed the crowd, speaking about break ups and his hatred of technology.

A striking contrast, Elohim announced herself with a computerized voice against bright graphics. Her upbeat electronic music pumped the crowd up as they danced to her hits like “Hallucinating” and “She Talks Too Much.” The screen behind showed an amalgam of visuals, incorporating pictures, video clips and graphics. She shed her sunglasses and hoodie by the middle of her set, and as the audience cheered and applauded, her face glowed with joy and excitement. She slowed down to close the show with a stripped cover of Harvey Danger’s “Flagpole Sitta” singing “I’m not sick but I’m not well” as the lights went down.

The silhouette of EDEN was illuminated by the lights behind him. EDEN’s rich voice opened the show with songs off his new album “I Think You Think Too Much of Me,” and quickly the crowd joined in singing along with hands raised. The intense and heartfelt lyrics struck the crowd’s heart and his heavy beat kept their bodies moving. Overcome with passion, EDEN’s voice filled the intimate venue as his fans sang along to songs like “Sex” and “Rock + Roll.” The crowd danced as EDEN alternated between his guitar and synth, the lights bright behind him. His unique covers of Michael Jackson’s “Billie Jean” and Outkast’s “Hey Ya!” captured the crowd’s attention. EDEN effortlessly blended his slower, darker songs like “Wake Up” with quicker lighter hits like “End Credits” for a show that didn’t stop and left the crowd ready for more. By the end of the night, his combination of exciting beats, captivating voice and genuine lyrics, had the crowd thinking “I don’t know how to forget you.” ​
View Full Photo Gallery