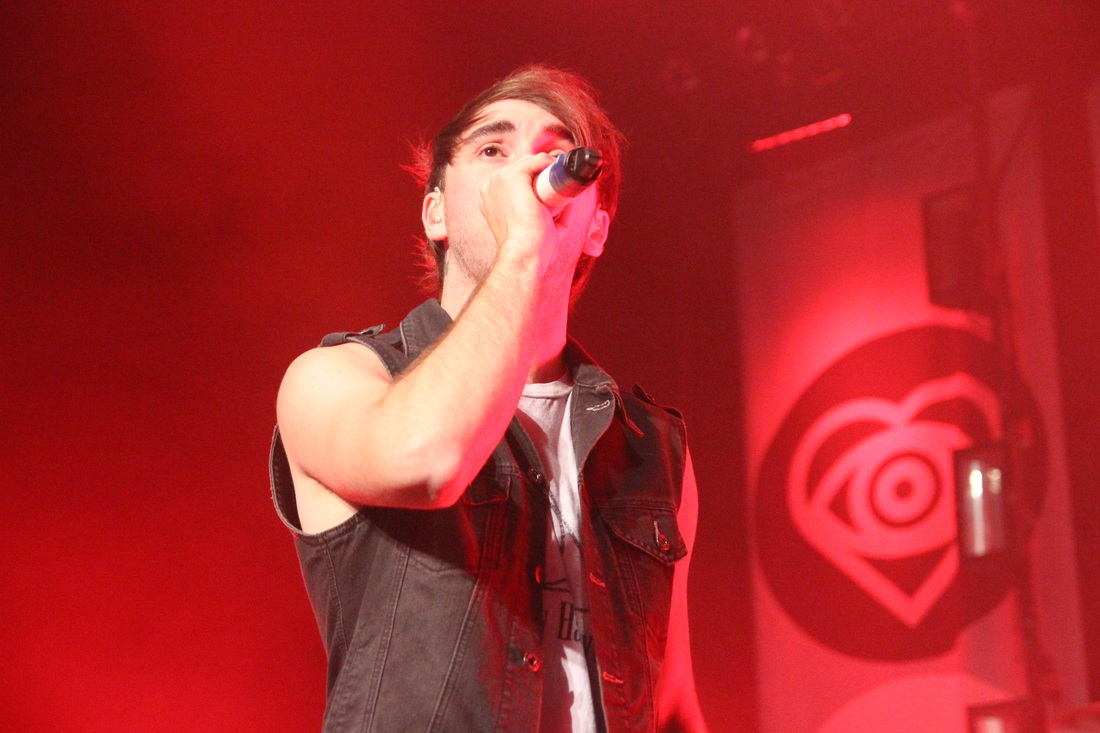 All Time Low
During the set, All Time Low guitarist Jack Barakat said, "I hope you guys don't take offense to this. I want you to take this as a compliment. I saw some of the hottest fucking moms today. I thought Alex's mom was hot and then I came here."

Playing at my favorite venue, the Hollywood Palladium, four amazing bands (and a surprise appearance from Mark Hoppus) came together for one of the best lineups I've ever been to. To start off the night, New York natives, State Champs, took on the stage, bringing amazing energy to pump up the Sunday night crowd. A sea of waving hands flooded the air all the way from the front row of the floor to the back of the balcony. State Champs put on a great show, ending with the Derek DiScanio jumping into the barrier to sing face to face with the crowd.

Following, with just as much energy, Australian band, Tonight Alive took the stage. Singing and waving with the crowd, the band made the audience a part of their set. Jenna McDougall took a pause in between songs to lead the crowd in making a promise. "Repeat after me. 'From this day. I refuse. To live in fear. Of someone else's judgement.' Fists in the air if you're ready to make that promise to yourself tonight." Cheers erupted as the band finished their set.

Next, with their Pokemon themed set, Issues came on, bringing a heavier, but just as energetic vibe. The band really rocked the Palladium with their metal influences. Although their sound is much more hardcore than All Time Low's, the band integrated seamlessly with the other acts.

Then, Blink 182 frontman and featured vocalist in All Time Low's "tidal waves", Mark Hoppus, got up on stage to "play his computer." He began his DJ set with my personal favorite Blink 182 song, "Family Reunion." Although he didn't do any live singing, Hoppus remixed many Blink songs as well as other rock and hip hop hits.

Finally, All Time Low came out to rock the Palladium. Within minutes, Jack's microphone was draped with bras that had been thrown on stage from the audience. The performance included strobe lights and confetti. Of course, Hoppus joined to sing "Tidal Waves." And Vic Fuentes made a surprise appearance for "A Love Like War." The band brought volunteers from the crowd to help sing "Time Bomb" and living up to his classic comedic attitude, Jack started stealing articles of the fans' clothing.

The performance overall was fantastic. Of course, it helps when the album is fantastic. The tour definitely lived up to this record and their past records.
View Full Photo Gallery