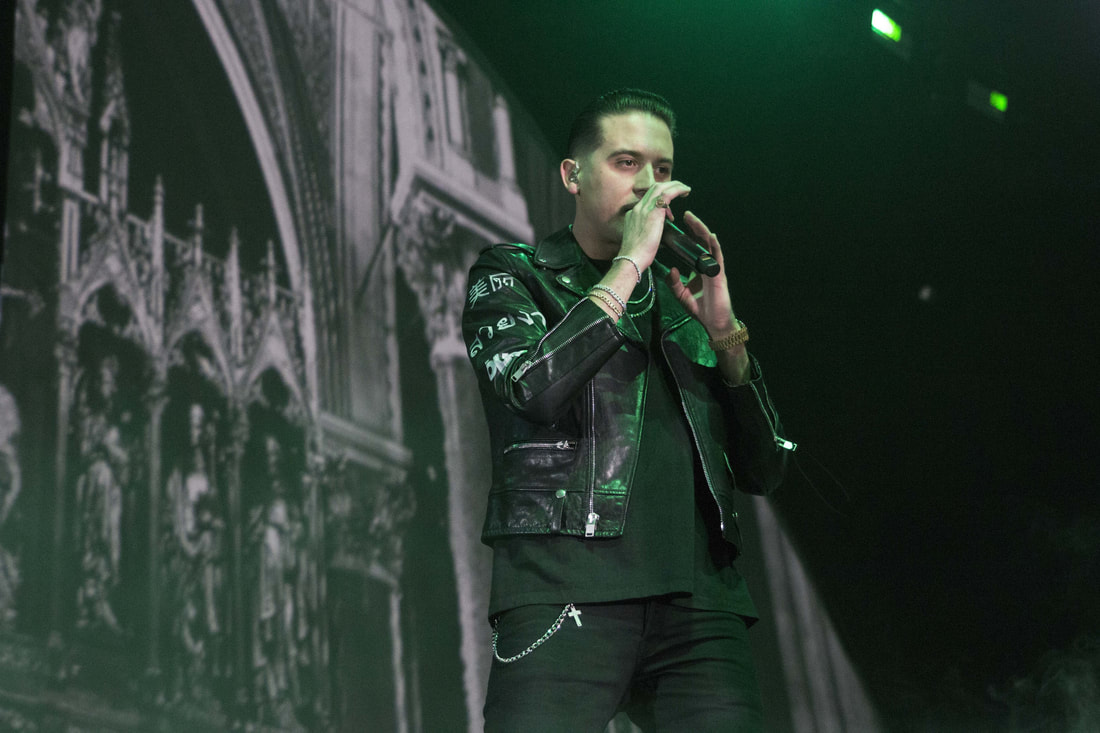 Anthony Russo, Phora and Trippie Redd opened for the Bay Area’s very own G-Eazy at his homecoming stop on The Beautiful & Damned Tour at the Fox Theater in Oakland on March 1, 2018.

G-Eazy brought a sold out crowd to the Fox after also playing a sold out show at the Bill Graham Civic Auditorium in San Francisco the previous night. At 7:50pm, just 10 minutes before the first performer Anthony Russo was scheduled to begin the show, the Fox had a line wrapping around the block. It left eager ticket holders trying to get into the venue to escape the cold weather threatening of rain. Wide-eyed fans said they “had never seen a line so long before.”

Anthony Russo kicked off the show as many G-Eazy fans were still waiting to get into the venue. The 20-year-old St. Louis singer-songwriter took the Fox by storm, literally walking on stage with lightning graphics being projected onto the backdrop screen. Girls in the front few rows yelled, “Russo! Russo! Russo!” as he began his impressive set. With smooth vocals and his energetic dance moves, Russo captivated the audience with his lively performance that seemed to be over in a blink of an eye. The crowd was left wanting more. Russo had a powerful presence and will be a growing artist to watch out for in the coming years.

With quick set changes, next up was Phora, a 23-year-old rapper from Anaheim. His set started out with everyone holding up their phone flashlights as he played his first song. He told the crowd that it was his first time in Oakland and that it was a blessing to be here and share the stage with young legends. Phora is lucky to be alive, he is a survivor of both a stabbing and a shooting. A vulnerable storyteller, Phora’s song delivery has been previously compared to that of J. Cole. In 2011, Phora founded his own record label and clothing company Yours Truly. With a frequent smile and running from one side of the stage to the other, the crowd could tell that Phora has passionate about sharing his story while performing and that he was very appreciative to be on this tour. For his last song of the night, everyone had their hands in the air and bounced to his music.

Topping off the list of young, hard hitters opening for G-Eazy was 18-year-old Trippie Redd. Trippie Redd’s DJ/hype man began the set by playing snippets of songs by Travis Scott and Kendrick Lamar in addition to having the crowd welcome Trippie Redd on stage by yelling, “14!” The rapper/singer from Ohio is also known as Lil 14 and Big 14. Sporting red hair and a flannel shirt with an open back, Trippie Redd was a character and put on an entertaining performance. Trippie Redd danced around and struck poses on stage with animated facial expressions while smoking a blunt. Trippie Redd had ‘trippie’ visuals to accompany his set. He performed a new song as well as fan favorites such as “Bust Down,” “Love Scars” and “Dark Knight Dummo.”

G-Eazy began his show with suspense, projecting a warning sign reading: “ATTENTION What you are about to witness contains explicit language, irresponsible behavior and themes of sex, drugs and self destruction. It will thrill you. It may shock you.” Next across the screen flashed “ACT I THE BEAUTIFUL” before the man himself appeared. G-Eazy’s hometown crowd went wild when he stepped on stage. He started off his The Beautiful & Damned Tour with, of course the first and title track of his new record, “The Beautiful & Damned.” From the moment his set began, G-Eazy put on a dynamic and powerful performance with his vocal talent and rap game in addition to his signature hops, kicks and jumps onstage. With a 2,800 person capacity, the Fox provided fans with an intimate G-Eazy experience, especially compared to the Bill Graham in San Francisco which he had sold out to 8,500 the night before.

G-Eazy was all smiles and radiated with excitement, repeatedly yelling, “Young Gerald is home! Young Gerald is home!” He said that selling out two nights in the Bay was a dream come true and asked the audience if they were ready to have the best night of their lives because “we have a lot to celebrate.” Grinning, G-Eazy said, “I’ve been waiting for you all, this is crazy.” Originally he said that he thought last night was the best night of his life, but by the end of the show he changed his tune. He exclaimed, “This is the greatest night of my entire existence! I am happy as fuck right now!”

Throughout the night, G-Eazy brought out a plethora of artists for special guest appearances including Yung Pinch, Nef Pharaoh, Marty Grimes, and Mistah Fab. G-Eazy hugged all of the surprise guests–his longtime friends–before they exited the stage after each of their respective collaborative songs. Unfortunately, G-Eazy’s girlfriend, pop phenom Halsey, was not able to make it to the Oakland show to belt out her parts in their hit track “Him & I” because she had a show in LA that night–talk about a power couple. G-Eazy’s mom was even in the pit to watch him perform.

G-Eazy’s setlist heavily consisted of songs off the new album, but also included hits from his previous two records including “I Mean It” and “Order More.” Before going into “Order More,” he paused and said, “Hold up, I need a drink. G a little thirsty. Where’s that Stillhouse stuff? If we run out, we’ll order more. Haha, see what I did there?” Notably, The Beautiful & Damned Tour is presented by Stillhouse Spirits Co. In 2017, G-Eazy announced his partnership and Co-Creative Director role with the company for what is his first spirits venture.

During his performance, G-Eazy paid tribute to his supporting musicians on the keys and drums. He also made sure to let the crowd know how much he appreciated them. He thanked fans for finding parking and coming out even though it was raining and cold outside. G-Eazy said he took BART to the Fox because he wanted to. He said, “It felt so good to hop off the train and walk to the show today.”

G-Eazy dedicated “No Less” and “Some Kind of Drug” to the ‘ladies.’ He acknowledged his respect for women and then said, “The Bay is home of the the most beautiful women in the entire world.” Audience members threw bras on stage. “Fly Away” concluded Act I and G-Eazy went backstage for a wardrobe change before re-emerging in all white, a strict contrast to his previous all black outfit, for Act II The Damned. During Act II, he played songs like “Random,” “Calm Down” and “Say Less.”

G-Eazy said, “From Berkeley High to the universe, this shit started right here!” He explained how he used to sell mixtapes out of a backpack a block away from the Fox and played his first shows at the New Parish around the corner. G-Eazy has sold out every show on this tour so far and has been all around the world, but he said, “There is nothing like coming home and seeing the reaction right here.” He said he never thought this would happen and it has been a beautiful blessing. It's been a lot of hard work for G-Eazy. He told fans that all of this did not happen out of thin air and that he was a “struggle rapper for a long time before it clicked.” He then went into his song “Eazy” to tell his story. He told the Bay Area, “You gotta be proud of where you are from. Maybe it’s something about the water, but they don’t make them like they do here.”

Act III Epilogue consisted of fan favorites “Him & I,” “Me, Myself & I” and “No Limit.” On his final song “No Limit,” he brought out all of his special guest performers to dance with him on stage as giant smoke blasts went off. To round off the theatrical production that was The Beautiful & Damned Tour, end credits rolled as G-Eazy walked off stage, listing everyone who had been a part of making the tour possible. From the wild show that seemingly ‘turned this shit into a nightclub,’ it was clear that the Bay Area knows ‘no limit’ and will continue to be hyphy until they can once more party with G upon his next return home.
​
View Full Photo Gallery