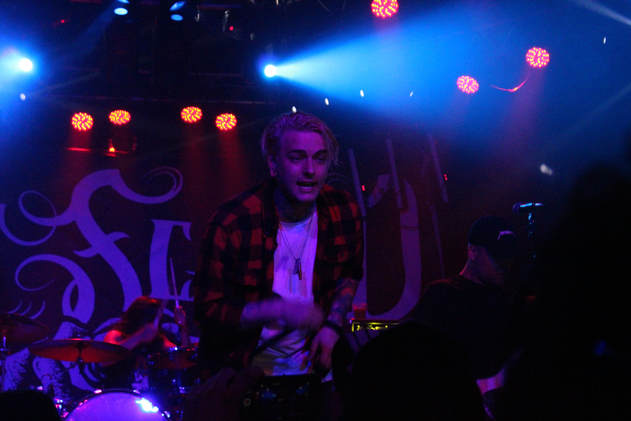 “One question, are we fucking still having a good time?!”
- Nicholas Matthews, Get Scared

​World War Me, Famous Last Words, and Get Scared stopped at the famous Whiskey a Go Go in Los Angeles on Wednesday, July 12 as part of their summer tour.

Opening the show were Beast Machine and Still Cross. As the venue filled up, Beast Machine got the night started with heavy riffs and fast beats. Still Cross took time to connect with the audience, explaining the significance of each song in the set.

World War Me came on next and immediately got the crowd hyped. Although the small stage was a bit cramped with all five members, that didn't stop the band from jumping and dancing. Kneeling at the edge of the stage, frontman Stephen Krypel sang directly to the audience.

Starting the set with their backs towards the audience, next up was Famous Last Words. As they played the opening notes, they let the suspense build until they finally turned around to greet the audience and the show began. The band brought incredible energy to the set as the crowd clapped and sang along and a mosh pit formed.

Finally, Get Scared took the stage, opening their set with “Deepest Cut.” It wasn’t long before the entire venue was head banging. Lead vocalist Nicholas Matthews encouraged the crowd to move closer as they played songs like “Buried Alive,” a cover of “My Own Worst Enemy” and “Suffer.” Everyone had both hands in the air as they jumped and danced to the beat. The set ended, of course with an explosive performance of “Sarcasm,” after deciding to “skip the charade” of walking offstage before an encore. That didn’t stop the audience from wanting another encore though. As soon as the band left the stage, chanting erupted as the crowd begged for “one more song.” However, they were unfortunately left unsatisfied.