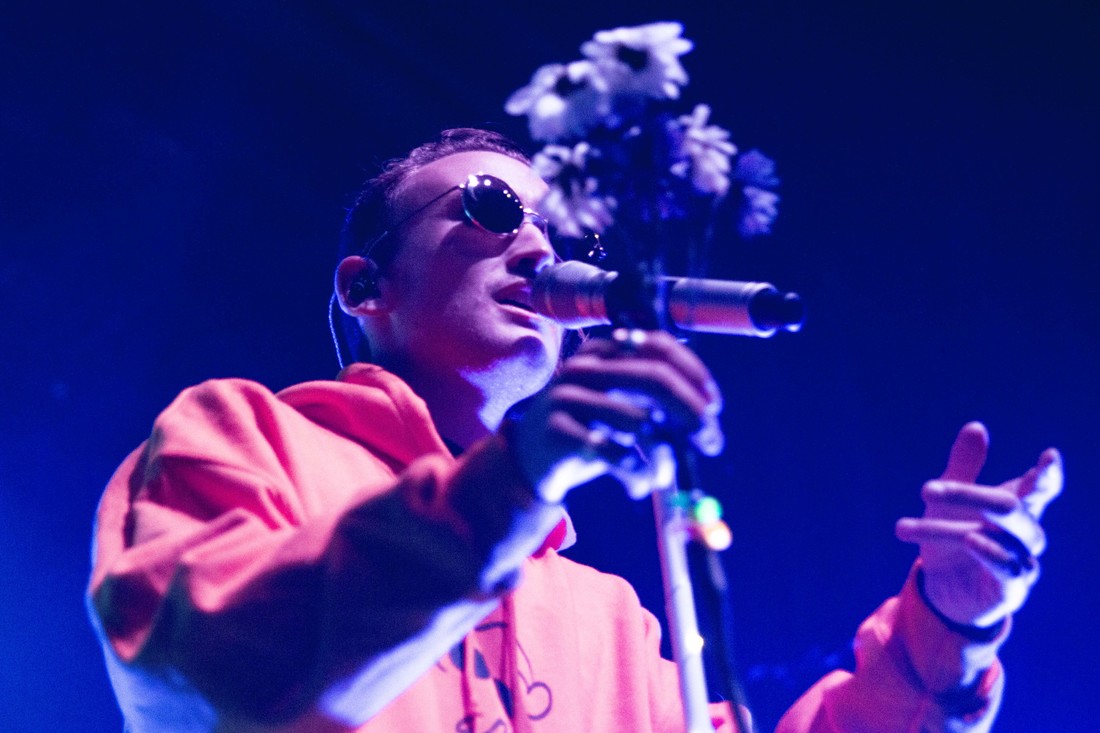 After just getting back from a tour in Europe, American artist gnash kicked off the sleepover tour at the Regency Ballroom in San Francisco on Friday, March 31, alongside good friends WRENN, MAX, Sweater Beats and more. Traveling with seven other artists and bands, gnash has accurately named the sleepover tour–a fun adventure with his friends amidst 24 concert stops in the US.

Most well known for is double-platinum hit “i hate u, i love u” featuring Olivia O’Brien, gnash recently signed to Atlantic Records and collaborated with The Fader and YouTube Music to release “homegrown,” a short documentary that looks deeper behind his emotionally charged music that almost resembles monologues.

WRENN, who is featured on gnash’s song “fragile,” put on a lively set as she played guitar and sung with the support of a band. She shouted out an ode to ‘shitty friends’ and took an instagram video with the crowd to wish her girlfriend Lane a happy birthday.

Rising artist MAX, who has been gaining traction from his hit “Lights Down Low,” put on a super fun performance! He had crazy energy, running around the stage and dancing like he invented the art form with a special interest in popping and locking. Charismatic and smiling the whole time, he hyped up the crowd for gnash and made a personal connection by singing to specific people in the audience. The audience loved his performance of “Gibberish,” the final song he played which left the crowd wanting more.

Sure enough, the crowd got more MAX when he came out during Sweater Beats DJ set to play their collaborative song “Did You Wrong.” Sweater Beats blends R&B into dance music for a unique flare. His own produced tracks seemed to be put together better in his live performance than his remixes. It would have been fun to hear more of his own work than remixes of popular top 50 songs. This music choice made it feel as if the Regency was more of a small club than a medium sized concert venue–Sweater Beat’s rehearsed performance did not seem to fit the atmosphere and was very different than the style of music gnash was about to perform. During his set, he also brought out rapper Imad Royal to perform their joint track “Better” and Sweater Beats even played a guitar on one of his final songs, shredding a solo.

With a cute setup, gnash went all out to make the sleepover tour authentic by putting a dresser and a bed canopy on stage with two LED screens in the background that played graphics of two bedroom windows with things such as butterflies or stars passing by. Gnash started his set sitting under the bed canopy with a bouquet of daisies in his hand. The flowers made sense when he began to perform his third song of the night “something” with them still in hand as he sung the opening lines: “Whoa oh oh oh, don't you know I could buy you a rose // Or maybe a daisy 'cause lately you seem into those.” Additionally the daisy appears on the cover art of his 2015 album me, which the single “something” is not on.

Since his friends are on tour with him, gnash brought out WRENN to perform their duet “fragile” and then later in the night he had MAX come out to play “Lights Down Low” with him. Gnash also did a cover of blink-182’s famous “I Miss You” and encouraged the crowd to sing by saying, “No one is too cool for this!”

Surprisingly, gnash said that the Regency is the first venue he has ever performed at with a balcony and he really liked it. Although he had a pianist backing him for the rest of his set, gnash played piano on “ilusm.” It was obvious that gnash wanted to connect with people through his music and that he loves what he does.

Gnash had the crowd bouncing throughout the night and got them to put their phone lights up several times. There were a lot of crazy fan girls who lined up hours before the show to get front row and knew the words to every one of gnash’s songs. Everyone in the audience knew the lyrics to “i hate u, i love u” and sung so loud that it was hard to hear gnash sing above all the noise. Gnash sung an extra verse on the song and asked everyone to put their phones down so they could be fully present in the moment–the crowd obeyed.

He ended his show with “fuck me up” and had all of his friends on tour dance on stage, the dance party to accompany a true sleepover. Before leaving the stage, gnash laughed and yelled, “San Francisco you fuck me up!”