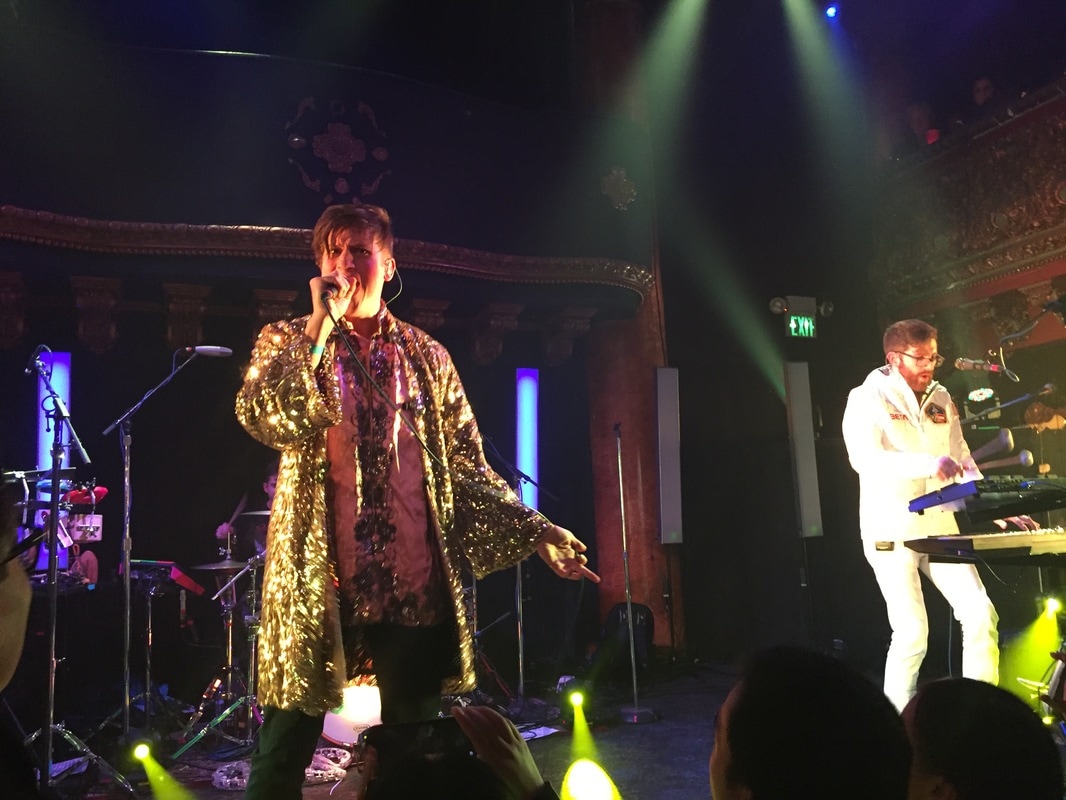 With all three touring band members dressed in all white, Bad Wave took the stage first. Synthpop band Bad Wave is a west coast duo consisting of Tucker Tota and Patrick Hart that hired a drummer to tour with them. Although the duo needs to work a bit on their stage presence, the drummer carried them through with his lively energy, never missing an opportunity to twirl a drumstick. Their recorded music was unfortunately much better than their live performance, but with a little practice the band will hopefully start to make their shows more entertaining as they move forward.

Next up was Flor. The band significantly amped up the show with a set that got the crowd more energized for headliner Great Good Fine Ok. Charismatic singer Zach Grace won over the audience. Jumping around and dancing with his long curly red hair, it was obvious that Grace was being himself and having a great time performing. The light-hearted and fun nature of the set was contagious. The band gave off the vibe of chill surfer dudes that had an extreme passion for the music they make. Grace even looked a bit like famous snowboarder Shaun White. Despite the band’s relatively small reach and following at this point in time, a couple of girls in the audience knew every word to every song they performed.

Great Good Fine Ok blew the audience away. The band had incredible energy and all of the gimmicks. The band is a duo, Jon Sandler and Luke Moellman, that hired additional musicians to tour with them. With flashing stand lights set up on the stage, light-up drum sticks and tambourines, and even light-up shoes, Great Good Fine Ok did not just put on a concert, they put on a light show. Everything was extremely colorful, from the clear color-lined drum kit to the neon tape they had used to stripe their microphones. Singer Sandler came out in a flashy gold sequined coat and pink sequined shirt. He was incredibly hyped for the set. It was also really cool that they had set up a band member with a full percussion set. Every element of the music was happening live. Dressed in what appeared almost to be a white spacesuit, Moellman on the keys also played an electric xylophone and brought out a keytar which was surely a crowd pleaser. Before the encore, Moellman went up the backstage stairs in Great American Music Hall and played his keytar amongst the crowd in the balcony, surrounded by fans taking selfies with him as he jammed out. Great Good Fine Ok released an album titled III at the beginning of Jan. 2017 and was sure to play all seven of those new tracks live. Sandler said that there was no place the band would rather be than in San Francisco for this important day in history–Trump’s inauguration. The band was simply amazing live, they are definitely worth going to check out. Even if you are not familiar with their music, the band will make you fall in love with them from the moment they take the stage.