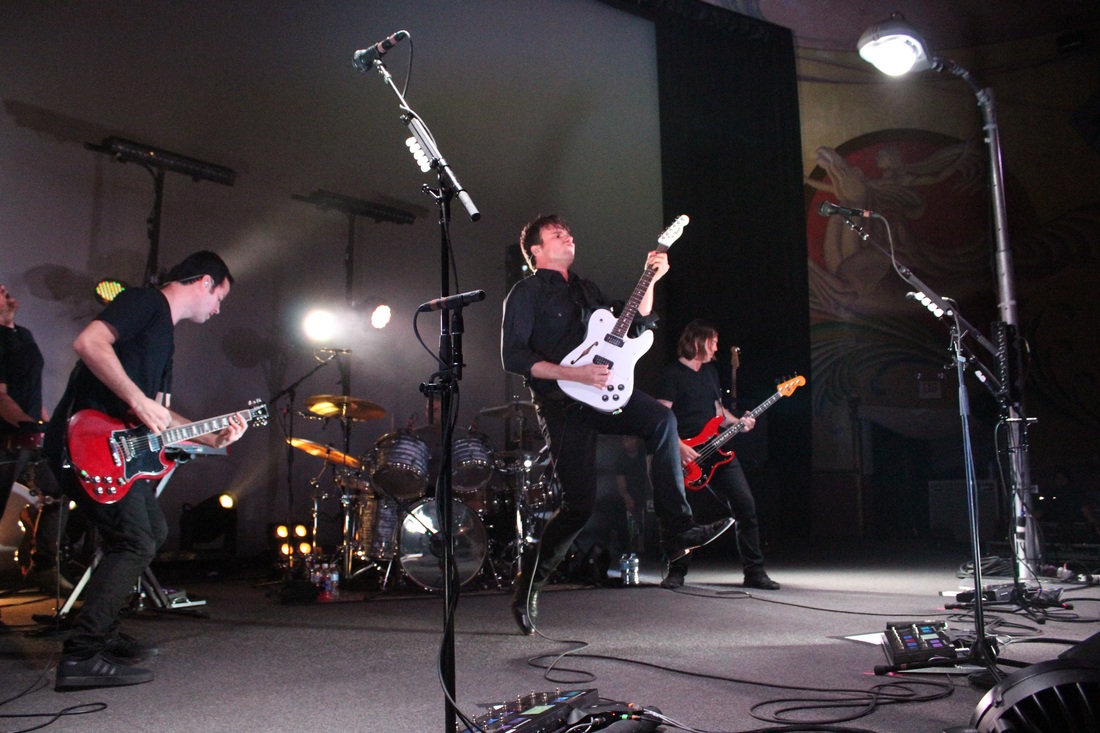 “This one gets the party meter right to ten!”
- Jim Adkins before starting encore with “The Middle”

The Hunna opened for Jimmy Eat World Monday, October 24th at the Fremont Theater in downtown San Luis Obispo. The movie theater turned live music venue welcomed a crowd of college students and locals, many of whom grew up listening to Jimmy Eat World, adding a nostalgic vibe. Traveling all the way from London, The Hunna really got the crowd going as they played their catchy alternative beats. Even those who had never heard of the band were singing along by the end of each song. The Hunna brought incredible energy and genuine spirit as they chatted and joked with the crowd in between songs. Frontman Ryan Potter explained, “We grew up listening to Jimmy Eat World just like you guys so it’s an absolute fucking roller coaster.” Although their set was relatively short, it was plenty of time to excite the crowd and get everyone out of their seats for Jimmy Eat World.

Opening with “Get Right,” Jimmy Eat World quickly excited the crowd on their Integrity Blues Tour. This excitement lasted for the first few songs, however toward the middle of the show the energy slowed. Both the crowd and the band stopped jumping and dancing. The set was decorated with lights, but other than that it was pretty bare. Nothing on the stage said “Jimmy Eat World,” there was no banner or even a logo on the bass drum. Unlike the previous band, Jimmy Eat World stayed mostly silent to the crowd. It was clear the focus was on the music. Unfortunately this became a bit monotonous after a while, as the songs started to blend together. The band took a break from their classics to play some new songs from their album Integrity Blues which was released October 21st. As soon as the band stepped off stage, the crowd began chanting. “One more song” and “Encore” filled the theater, and the band didn’t disappoint as they came on to play three more songs.

The energy picked up again when the encore started. It was like a completely different concert. All of a sudden, the crowd was jumping and moshing. The lights went crazy, flashing every color. The band started jumping as they rocked out “The Middle,” “Sure and Certain,” and “Sweetness.” Sweat rolled down Jim Adkins’ face and onto his black button down shirt, as he flipped his hair. This was the nostalgic part, the part that made everyone feel like they were back in middle school. The encore was definitely the highlight of the show, that’s when it really felt like a rock show.
View Full Photo Gallery