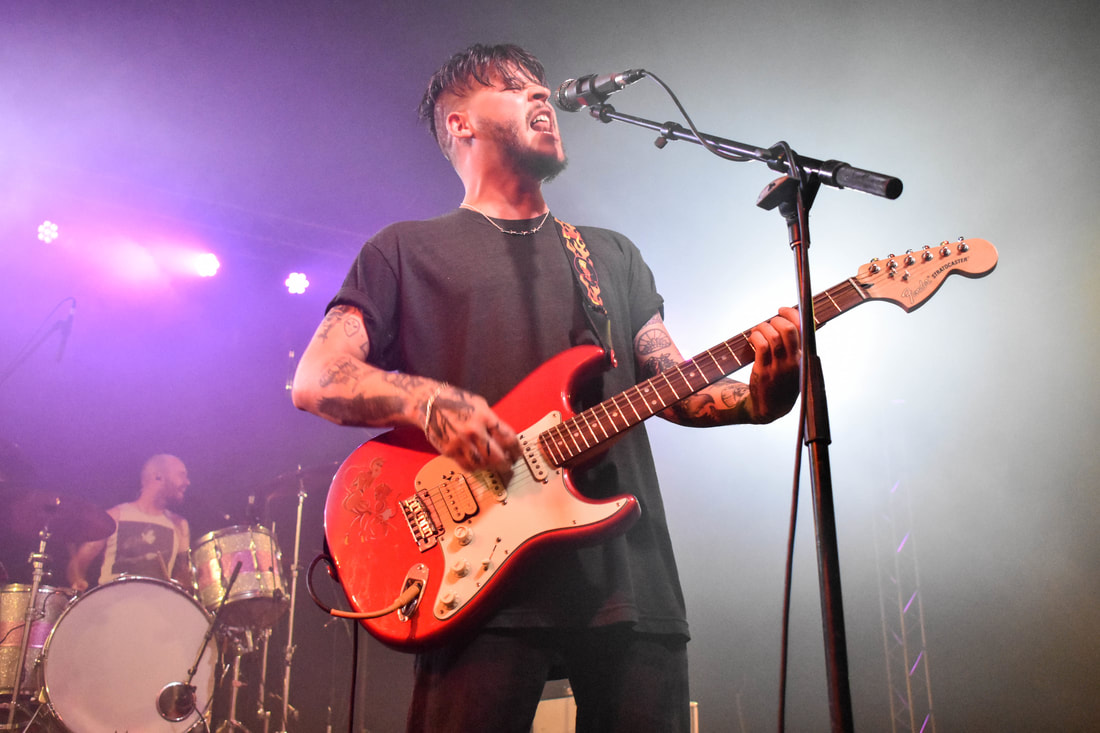 SOMA was a sea of flailing limbs and sweaty faces as emo rockers Joyce Manor and Wavves brought their co-headlining tour to the San Diego venue.

Los Angeles-based French Vanilla opened the show with nostalgic 80’s flair. With hair evocative of the craziest 80’s styles and a voice reminiscent of a B-52’s vocalist, lead singer Sally Spitz led the eager young audience through a repertoire of post-punk of the band’s own creation. A crowd-pleasing cover of ABBA’s “SOS” received cheers and an enthusiastic sing-along, but it was the young band’s original work combined with their command of the stage that truly impressed. The members were constantly switching instruments and their animated presence made them fascinating to watch. In addition to the punchy bass riffs typical of post-punk, French Vanilla’s staple quirky saxophone trills intrigued and excited. The act’s crowning glory, “Carrie,” was a boisterous retelling of the classic horror story. “Carrie got her period in the shower!” screamed Spitz, drawing shock from some, but not fazing those lost in the mosh pit. The performance was jarring, yet oddly appropriate given the season.

Joyce Manor were on soon after, eliciting enthusiastic screams from the tightly packed crowd even before they stepped onto the stage. The four-piece led with their fist-pumping track “Beach Community,” making way for a similarly fast-paced set. The young men on stage smiled and bounced to their collection of songs, while audience members sang, shouted, and lost articles of clothing in the rowdy pit. The energy was similarly strong for the band’s punk rendition of the Buggles classic “Video Killed the Radio Star.” And while covers and trusted originals are a safe bet with a loving audience, Joyce Manor took a risk with a performance of a new song entitled “Million Dollars to Kill Me.” The choice paid off, receiving a warm reception in the form of more screams, more moshing and a mass of crowd surfers. At times during their performance, lead singer Barry Johnson found moments to compliment the crowd on its passion. He could empathize, sharing his own fondness for the musicians that brought him and the rest of the band to their current state. He recalled a moment years prior in which he drove down to San Diego to see a few bands he loved, and stated how appreciative he was of the crowd that felt similarly towards his music. In turn, the mutual appreciation shown by his listeners could not be overstated. Joyce Manor closed with their track “5 Beer Plan” and waved goodbye.

Wavves took the high energy born in Joyce Manor’s set and kicked it up a notch. Lead Nathan Williams belted, drummer Brian Hill pounded, and guitarist Alex Gates strutted about the stage, all flaunting their presence to screaming fans. Of particular note was bassist Stephen Pope, who, despite battling a fever, commanded the stage. His refusal to take a sick day was a true rock star move, projecting an image that was only reinforced by his classic V-shaped guitar and his insane head of hair. These San Diego natives were both literally and figuratively at home while showcasing their righteous surf-punk. Crowd surfers were out in full force, riding the human waves of limbs and not taking a moment to stop. “In between songs, huh?" chuckled Williams as another crowd surfer was chucked over the barricade. Clearly having fun, the band found time between their distorted guitar tones and heavy-hitting bass lines to riff the “Rock Lobster” intro and discuss the merits of carne asada burritos. Wavves had no need for an encore, finishing strong with “Post Acid”, dropping their instruments, and walking off with dramatic punk flair. The reckless spirit that penetrated the venue from the beginning of the night persisted until the final note.
​
View Full Photo Gallery