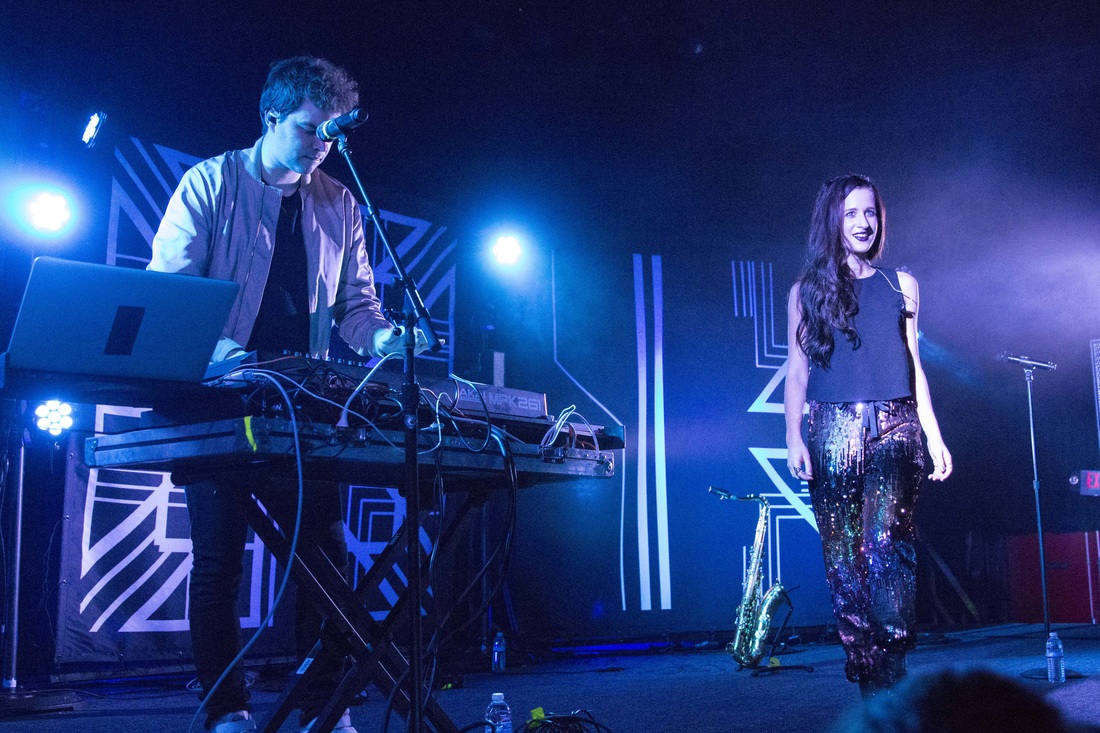 SHAED and Vérité opened for Marian Hill on the Act One Tour at The Fillmore in San Francisco on Sunday, September 25.

SHAED took the stage first and pumped up the crowd with their fresh beats. They played songs from their new EP “Just Wanna See” released earlier in the month, as well as songs that have not yet been released. Although the crowd was not too familiar with their music, the band's charisma carried them through and had the audience dancing for the entirety of their set. SHAED’s passion for music and excitement to be on the tour with their new friends Vérité and Marian Hill showed through their big smiles and energetic nature. Singer Chelsea Lee impressively belted out the vocals on “Thunder,” a song with political undertones as the band members originate from Washington DC. “Running Through The Fields” seemed to be a crowd favorite that had everyone moving. Lee pointed out a crowd member and commented on their dancing, hands in the air holding free apples that The Fillmore hands out at every show. It is rare to see such a great opener, a band that was able to have a seamless, defined sound and win over the crowd with their charismatic presence.

Vérité had a very different attitude and stage presence than SHAED. While SHAED was fun and cheery, Vérité did not seem to be in as great of a mood at the start of her San Francisco performance. However, Vérité improved and connected more with the crowd towards the end of her set. Despite the sense of drama and lack of small talk, Vérité brought a lot of physical energy to the performance. Impressively, she danced in heels for her full set and continuously walked from one of the stage to the other with animated gestures that served to emphasize her powerful vocals. She started off “Underdressed” with a piano solo which quickly picked up when her other two backing band members came in. She also used two mics throughout her performance that gave off two different vocal effects–one that was normal and the other with a bit of reverb and distortion. Before playing a cover of “Sober” by Childish Gambino, Vérité said, “We’re gonna get quite for a sec and then get rowdy as fuck!” Although the crowd was saving their energy for the main act, the much anticipated Marian Hill, the energy did pick up a bit at the end of Vérité’s set when she ended with her hit “Weekend.”

Philadelphia duo Jeremy Lloyd and Samantha Gongol, collectively known as Marian Hill, set down a foundation for the rest of their performance when they came on stage and immediately dropped the beat into their hit “Down.” Their performance was a jazz pop extravaganza that featured their friend Steve Davit on saxophone. Davit was a star of the show as fans went crazy over his fantastic performance and flawless dance moves.

As the music blasted, the stage also transformed into a light show that almost seemed to feed off the crowd themselves. The band’s excitement was evident when they said that this was the biggest crowd that they had ever played to inside a venue on their own headlining tour. Lloyd and Gongol’s dynamic was nothing less than fire. As Lloyd would pump out beats, Gongol would stare at him intently while belting out her vocals. There was an inner narrative within the band that is not commonly seen in other live performances.

In between songs, Lloyd told the crowd how Gongol and him write all of their songs together. He said, “Sometimes the songs are about her, sometimes they are about me and sometimes they are about neither.” Before going into “Talk To Me,” Lloyd continued, “This one started out about me and a few months later it was all about her.” Putting their song “Good” into context, Gongol said, “This one is about finally getting over that relationship that has taken you too long.”

Besides playing their own songs, Marian Hill also surprisingly played a cover of Whitney Houston’s “I Wanna Dance With Somebody.” After the cover, Lloyd and Davit soloed so Gongol could go off stage to relax her voice before coming back with a smile on her face as she explained that the band’s love for San Francisco grows, from the first time the played the Rickshaw Stop all the way to Outside Lands. Before going into “Got It,” Gongol said, "Ladies and gentleman, let's take it home!"

The band went offstage and then was cheered back on stage for an encore where they played “Whisky,” “Lovit” and closed off with playing part of “One Time” one more time as they had performed the song in its entirely early in their set. They surely did take the crowd home with hits from their EPs and newest album Act One. San Francisco can only hope that this was only act one of many more shows to come.