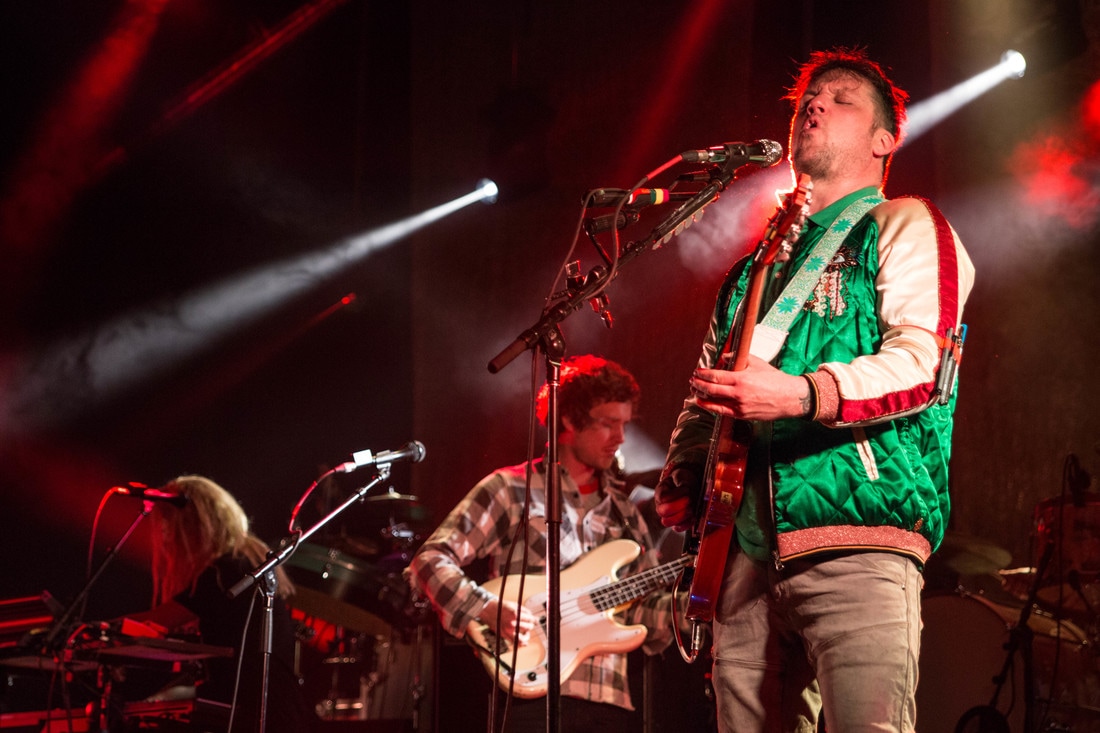 ​Morning Teleportation opened for Modest Mouse at the House of Blues in Anaheim on Friday, June 2.

Kentucky band Morning Teleportation was excited to be performing before the proclaimed headlining act Modest Mouse. From talking with the four band members at the merch table before the show, I learned that some of them had never been to California before. They got a different vibe from California than other places that they have been. They were impressed with what felt like an endless city, but felt that everything is expensive in the golden state; however, they admitted that while they are on tour, they do not get to do much traveling and see mostly the inside of venues. They arrived at the House of Blues at 2pm and had been there all day. The guys were chill and met with fans and friends before the show. They went backstage 20 minutes before their set to collectively decide on their setlist for the night, vibing with what they were feeling at the time.

Stepping out on stage, Morning Teleportation lead singer and guitarist Tiger Merritt dropped his guitar while putting the strap on and said, “It’s alive!” This gave their stage presence a lighthearted feel, even before they started playing music. On stage with them, they had a stuffed animal squirrel on Travis Goodwin’s keyboard and a dumbbell with a face on it center stage. Morning Teleportation was continuously in sync with each other, communicating musically. Their live set sounded more cohesive and less chaotic than their recorded music. There was not much talking on stage, rather they let their music do the talking, with the exception of the band answering that they are called Morning Teleportation when several audience members continuously yelled, “Who are you?!” Goodwin was animated while playing the keys, standing up and emphasizing his chords to the strobe lights and light designs that where projected onto the back of the stage. The band packed in a full house and seemed to be having a blast on stage, smiling and laughing the whole time.

An older band itself, Modest Mouse brought in an older crowd of original fans that have been following the group for years. Some fans in the front row even travelled across the state to catch Modest Mouse perform in Anaheim and went to Disneyland before the show. Their set started off with the sound of bees buzzing amplified throughout the House of Blues. After appearing on stage, frontman Isaac Brock told the crowd, “We welcome you to the House of Blues complex. That was my robot voice!” Modest Mouse brought all of their toys, there was no shortage of instruments–a standing bass, banjo, trumpet, wind chimes, violins, acoustic guitars, and even a percussion player in addition to a drummer. Joking about all the instruments, Brock said, “Sorry for all the guitar changes, I haven't figured out which one to buy. Does this one make me look fat?” Brock also had a plethora of microphones on his mic stand to achieve different effects. He had personality as he sang, thrashing around in his place on stage. The crowd was hyped and dancing for “Dashboard” which the band played mid-set.

Between songs, Brock liked to be a comedian on stage. He cracked a joke about the audience applying and filling out paperwork to attend the show and said that it was not a tax write-off and barely qualified as a waste of time. He later stuck a guitar pick to his sweaty forehead to perform and told a story about running late in an Uber.

The band played for an hour and a half before they went backstage to come back out for the encore–the show seemed to drag out a bit and a fair amount of fans left before the encore. Modest Mouse played a set that was musically really good, but the band members could have tried to move around on stage more in order to create a more visually engaging and interesting performance, rather than standing still and simply playing the instruments. The stage size at the House of Blues was also quite large and it was surprising to see that the band was set up with a relatively large amount of empty stage space in front of them–it seemed to create distance between them and the audience, not only physically, but also emotionally.

Despite these few minor setbacks, it was an overall fun show that had fans dancing and singing to some of their favorite Modest Mouse tunes from the band’s extensive discography.
View Full Photo Gallery