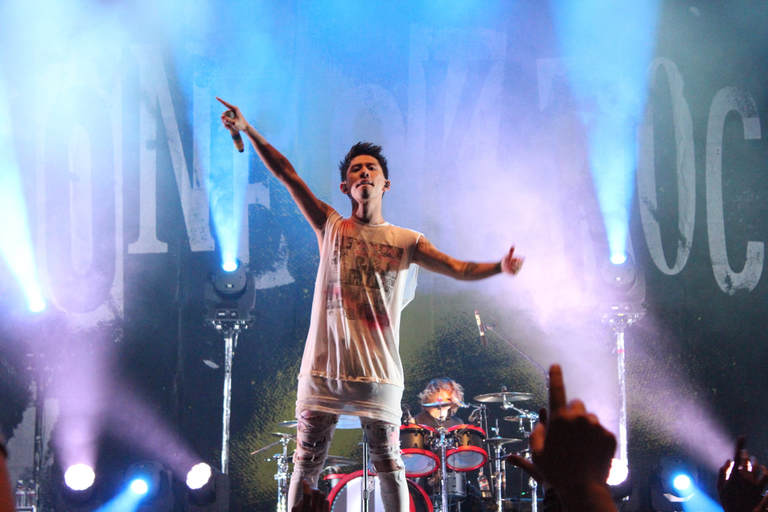 Playing two nights in a row, Palisades and Set It Off opened for One Ok Rock at the Wiltern in Los Angeles on August 11, 2017.

The lights dimmed and the crowd started to cheer. Dramatic music played in the background as Palisades ran onto the stage lit by flashing red lights. Opening their set with "Through Hell," they immediately won over the audience who clapped and danced along. Dedicating the song "Dark," to fellow musician Chester Bennington, lead singer Louis Miceli explained the impact he had on the band. Lit up phones swayed in the air as the audience helped pay their respects to the late Linkin Park singer. Mixed in with their original tunes, Palisades also played a cover of X Ambassadors' "Unsteady." The band ended their set with their most popular song "Let Down."

Set It Off came on next. The band jumped and danced around the stage as they played their upbeat songs. In the crowd, the audience sang and waved their hands to the tunes. Between songs, lead singer Cody Carson conversed with the audience saying, "You know what my favorite part about a show is?" He talked about how it doesn't matter what is on your mind or how you're feeling because "everything you've ever felt comes out right here." As the crowd felt united through the music, Carson turned the next song “Something New” into a sing along.

Finally it was time for the headliner One Ok Rock. With the first note of each song, the crowd exploded with excitement, immediately recognizing the tune. The Japanese band played the English version of most of their songs, but threw in the occasional Japanese song like they did for “Bon Voyage.” The audience jumped and danced as the band played many songs from their new album Ambitions which was released January of this year. In the middle of the set, One Ok Rock also took some time out to honor Chester Bennington, playing a cover of Linkin Park’s “One More Light.” The mood quickly changed as the audience went still. The band followed the slow tune with a partially acoustic version of “Take What You Want” before returning to their faster beats for the rest of the set.
View Full Photo Gallery