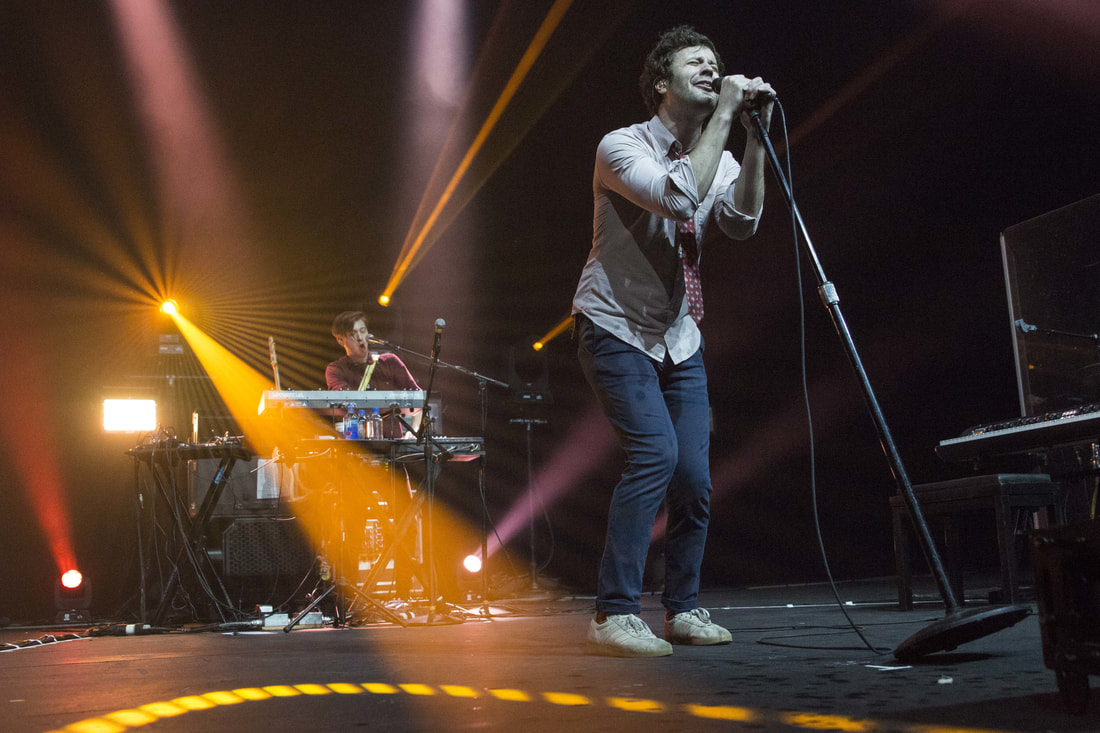 Neil Frances and Courtship. opened for Passion Pit at the Fox Theater in Oakland on Monday, January 29.

Dressed in all white, the 5-piece band Neil Frances walked out on stage. The audience thought that the singer looked like Kurt Cobain and started yelling, “Kurt! Kurt! Kurt!” The signer thought it was funny and smiled. He then said, “The name of our band is Neil Frances.” And then someone yelled, “Did you say Nirvana?!” Neil Frances had a smooth, indie sound with some psychedelic influences. While the band played their songs, what really caught my eye was the female keyboardist who asserted herself on the stage and contributed a lot to the group’s sound and made it what it was, not only through her instrument, but also through her pure backup vocals which truly rounded out the tracks.

Courtship. was up next and delivered an energetic set that kept the crowd engaged and dancing. Following Neil Frances’ lead with the matching outfits, the members of Courtship. were all wearing the same orange flight suits. The band put out good vibes, and even if you weren’t familiar with their music before, it was a really fun set that kept the audience wanting more. Blue lights engulfed the stage during “Sail Away” and people began clapping with their hands over their heads during the lively performance of “Sunroof.” The synth pop band said their favorite place to play consistently is the Bay Area. Guitarist Eli Hirsch told the crowd that his favorite band when he was 16 was Passion Pit and he was so excited to be opening for them at the amazing Fox Theater. Running around on stage and headbanging, there was never a dull moment with Courtship. The band had a light, carefree sound that felt like summer. They played their newest song “Bad Fun.” Hirsch said, “I am 1,286% positive you all know the words to the next song... so I'm pretty fucking sure. Are you all ready to sing along?” The group went into a cover of “Hey Ya!” by OutKast and the crowd went wild. They split the room in half to sing along and during the chorus, everyone came back together. Explaining that this was “the craziest shit of all time,” Hirsch told the audience that they made their first song in his bedroom a little over a year ago and they were so thankful for how far they have come. Expressing his gratitude Hirsch said, “Thank you all so much for listening.” Courtship. ended their set with “Tell Me, Tell Me” and “Stop for Nothing.”

Passion Pit put on a dynamic performance. The Massachusetts-based band led by Michael Angelakos put their all into the set. Angelakos would belt out and hold his notes while wildly jumping around the stage with his characteristic movements. He would twirl the microphone cord around and even threw water onto the audience. During “Sleepyhead” he stood on a stool, commanding the attention of the crowd. Lights flickered and scanned over the energetic showgoers. Angelakos’ distinct high voice pierced through the venue and he even played piano on some songs. Interestingly, Passion Pit did not play any songs off their newest album Tremendous Sea of Love which was released in 2017. Everyone’s hands were in the air clapping along to “Smile Upon Me.” After playing “Lifted Up (1985),” Angelakos said, “You guys fucking rule, thank you!” Before going into “Little Secrets,” Angelakos explained, "We are all getting over colds and shit, but you are breathing life into us Oakland!" Passion Pit came back out for a two song encore. During “Constant Conversations,” the whole theater sung along to the “oh oh ohs” as Angelakos pointed the mic towards the crowd. After the song, he said, “It's been a crazy few months for me so this tour has been one of the most heartwarming things ever. Thanks for perking me up!” As a tradition, the band had everyone put their hands up and bounce up and down to fan-favorite “Take a Walk.” The show came to a great close and the Bay Area is eagerly awaiting for Passion Pit to return, hopefully with songs from Tremendous Sea of Love next time around.
​
View Full Photo Gallery