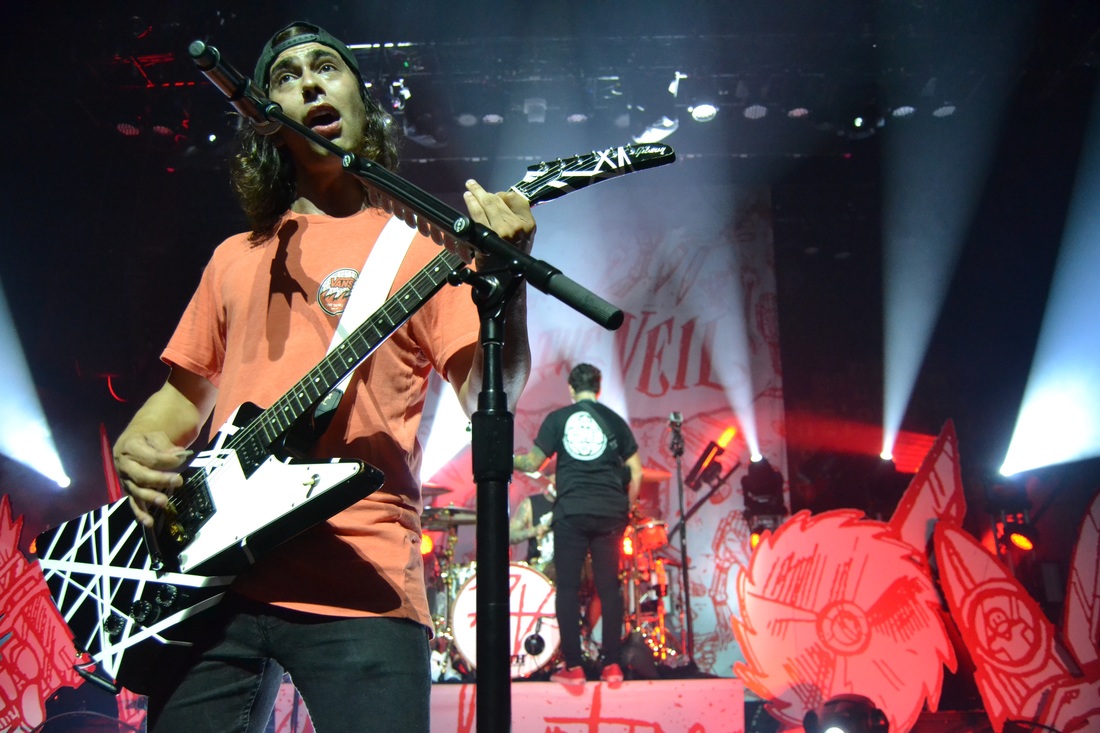 “This was a crazy album for us and this was a really crazy process. It took us all over the world!”
-Vic Fuentes

Playing a sold out show at the Mayan Theater in Los Angeles, Movements and I the Mighty opened for Pierce the Veil on June 26, 2016. Within seconds of Movements playing their opening notes, the first crowd surfer jumped into action. As she got pulled into the pit by security, frontman Patrick Miranda greeted her with a fist bump and smile. This prompted more surfers to join in and set the tone for the night.

The Mayan Theater seemed to be a small venue for a band as big as Pierce the Veil, but the crowd made up for it with their character. Moshing, chanting, and singing, the audience was in for quite a show. This show was the final stop on the Misadventures tour, prompting a celebratory atmosphere, as well as a few pranks. During the last song of each set, members of the other bands came out from backstage to shower the performing band with balloons, toilet paper, silly string, and more.

With amazing energy, I the Mighty took the stage next. They played a fabulous set which included a sing along to “Happy Birthday” dedicated to guitarist Ian Pedigo on his special day. I the Mighty pumped up the crowd not only for Pierce the Veil, but also with the announcement of their upcoming headlining tour which will begin in two months. As they approached their last song of the night, lead vocalist Brent Walsh encouraged the audience to “raise [their] energy tenfold.” The crowd responded with a circle pit and the band ended their set as Movements and Pierce the Veil joined them onstage with furry pink boas.
​
Finally, it was Pierce the Veil’s turn to play. With confetti, fog, and lots of lights, the band put on an amazing performance. The setlist was comprised of the band’s entire album, Misadventures, which was released May 13, 2016. From the first track, “Dive In,” to the last track, “Song for Isabelle,” the band demonstrated how special this album was to them. While this made for a unique show, it would have been nice to hear some classics like “Hold on Till May,” “Bulletproof Love,” and “Caraphernelia.” They followed up their act with an encore performance of “Bulls in the Bronx,” “King For a Day,” and, of course, more confetti. Overall, this show and the entire tour was a success. The new album, and show as a whole, stayed true to Pierce the Veil’s style, resulting in a crowd pleasing performance.
​
View Full Photo Gallery