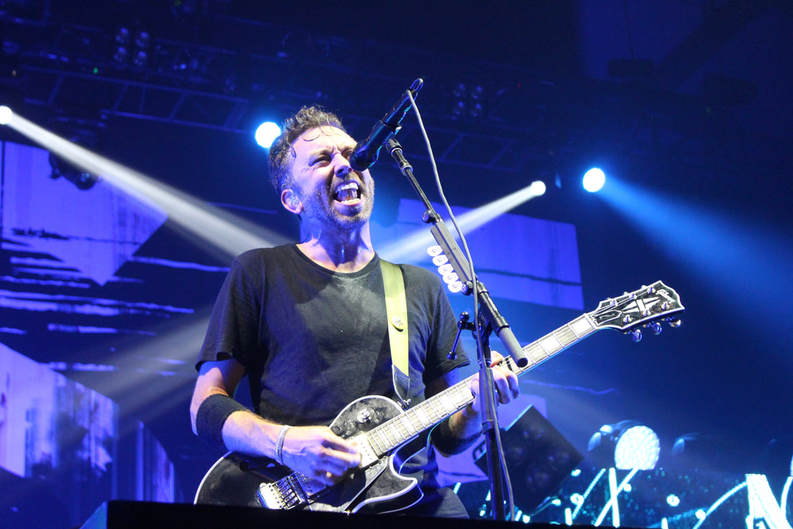 Plague Vendor and Of Mice & Men opened for Rise Against on July 13, 2017 at the Shrine Expo Hall in Los Angeles.

Playing on a poorly lit stage, Plague Vendor began the show with an energetic set. Frontman Brandon Blaine asked if someone could turn on some white lights, but when there was no response he said "fuck it" and continued the set. The lighting problem didn't hinder the performance at all as the band showed off their personality through each song. Blaine shuffled and danced across the stage with super fast footwork and even did a handstand on the drum set. At one point, he dangled the mic stand into the audience and then proceeded to use it as a barbell doing some presses and curls. Halfway through the set, the lights finally came on so the crowd could really see the action. It was clear there was a good relationship growing between the band and crowd. Blaine exclaimed, "You know what you guys are really fucking cool. I can tell so it's a good relationship.” This relationship was further intensified when he crowd surfed on two separate occasions during the set.

Of Mice & Men came on next with a heavier set. Hands in the air, the crowd jumped to the beat and vocalist Aaron Pauley encouraged them saying, "I wanna see your feet off the ground." There were even a few crowd surfers as the band played one of their recently released singles, "Back to Me." Before starting "You Make Me Sick," Pauley said, "Before we play this next song I need to see a big ass circle pit right in the middle!" The audience obliged, fists pounded the air in unison with the heavy beats.

As the lights dimmed, cartoons played on two on-stage screens. Rise Against ran on stage as the crowd cheered and the band began to play “Collapse (Post-Amerika).” There was incredible energy throughout the venue, both onstage and in the audience. Guitarist Zach Blair jumped and kicked across the stage. In the crowd, everyone was jumping and singing along as random objects like shoes and jackets would get thrown through the air. There was a palpable excitement throughout the Shrine when frontman Tim McIlrath surprised the audience by announcing that the next song would be “Like the Angel,” a song they were playing for the first time on this tour. Between songs, the always inspiring McIlrath had plenty of words of wisdom to share. He explained that their newest album Wolves “is all about refusing to accept defeat. It's all about being a wolf at the gate. What it feels to be alive in 2017. What it feels to be alive right now.” Halfway through the set, McIlrath stood alone with his acoustic guitar to slow down the tempo a bit. He played “Swing Life Away” and “Hero Of War” as phones and lighters lit the audience as they swayed side to side with the songs. The band ended the set with “Prayer of the Refugee” before coming back for an encore consisting of “Make it Stop (September’s Children)” and “Savior.”
View Full Photo Gallery