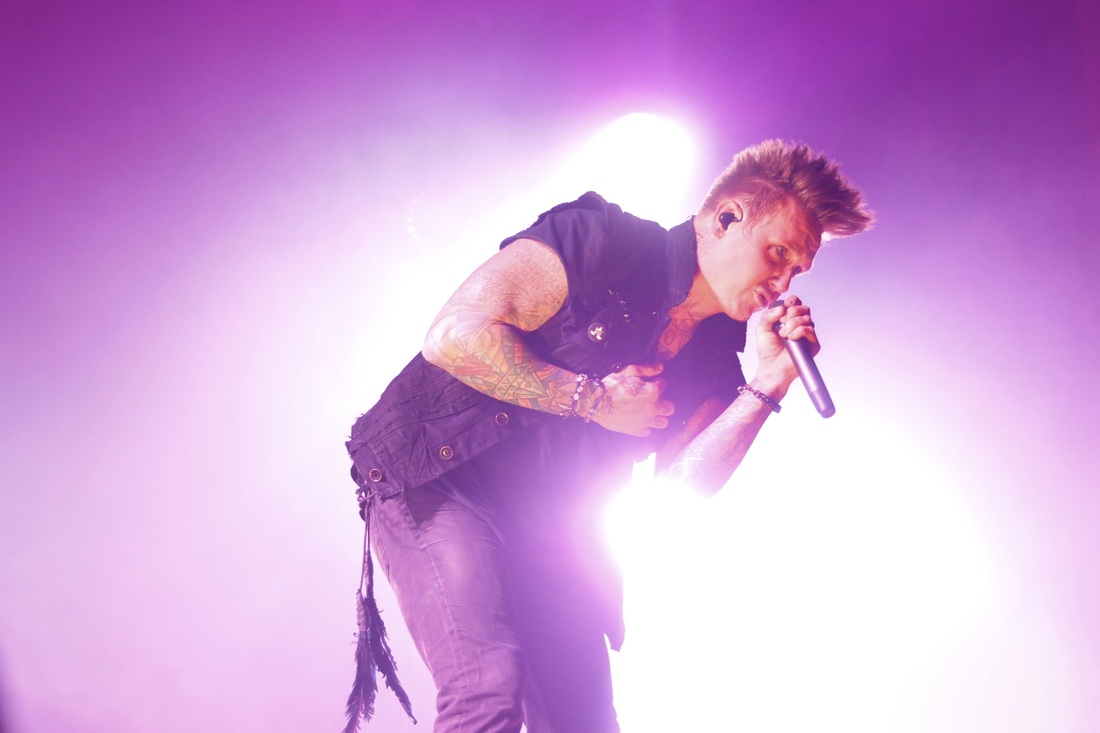 Papa Roach
Singer Jacoby Shaddix talked about the band's new album Fear and showed his appreciation to Papa Roach fans by saying, "Thanks for supporting new music. It means the world to us."

Islander and Kyng supported Seether and Papa Roach on their San Francisco, CA co-headlining tour date at the Warfield on 2/5/15. Islander started the show out strong and ended their set with the crowd moving under vocalist Mikey Carvajal as he crowd surfed and chanted, “Islander!”  Kyng came out as if they were royalty, singer/guitarist Eddie Veliz’s long hair flowing in the wind. At one point a fan yelled to Veliz, “Turn your mic up!” and being the fun loving guy he is, Veliz literally turned his mic up by pointing it towards the sky. Later another fan yelled, “‘Freebird!’” to which Veliz responded, “We are going to do ‘Freebird’ because the fucking asshole over there said freebird.” Kyng had great fan interaction throughout there time on stage. Seether was up next and the crowd went nuts. With the help of bassist Dale Stewart’s energetic presence and the strobing lights, the venue turned into a party, especially when everyone in the crowd danced as the band played a fan favorite, “Country Song.” Before Seether went offstage they said, “Make some noise for our boys in Papa Roach!” The crowd went crazy over this, foretelling the amazing performance that was to come.  Papa Roach killed it and Shaddix was right at the beginning of their 15-song set when he said, “We got the fucking makings for this to be fucking epic tonight!” The band started “Burn” when Shaddix was still in the crowd from the previous song and he went with it and sang his heart out while crowd surfing. Papa Roach announced that they will be playing a show in April that will benefit the building of a new cancer research center.  In between songs, the band played a short interlude covering Sublime’s famous “Doin’ Time” which fans loved. Near the end of the show, Shaddix handed out a backstage pass to a guy who had been very energetic for the entire concert so the fan could have a beer with the band after the show. Papa Roach ended with “Last Resort” and when the song was over Shaddix sprayed a water bottle and threw it into the crowd and put a great close to the show by saying, “San Francisco we fucking love you!”
View Full Photo Gallery