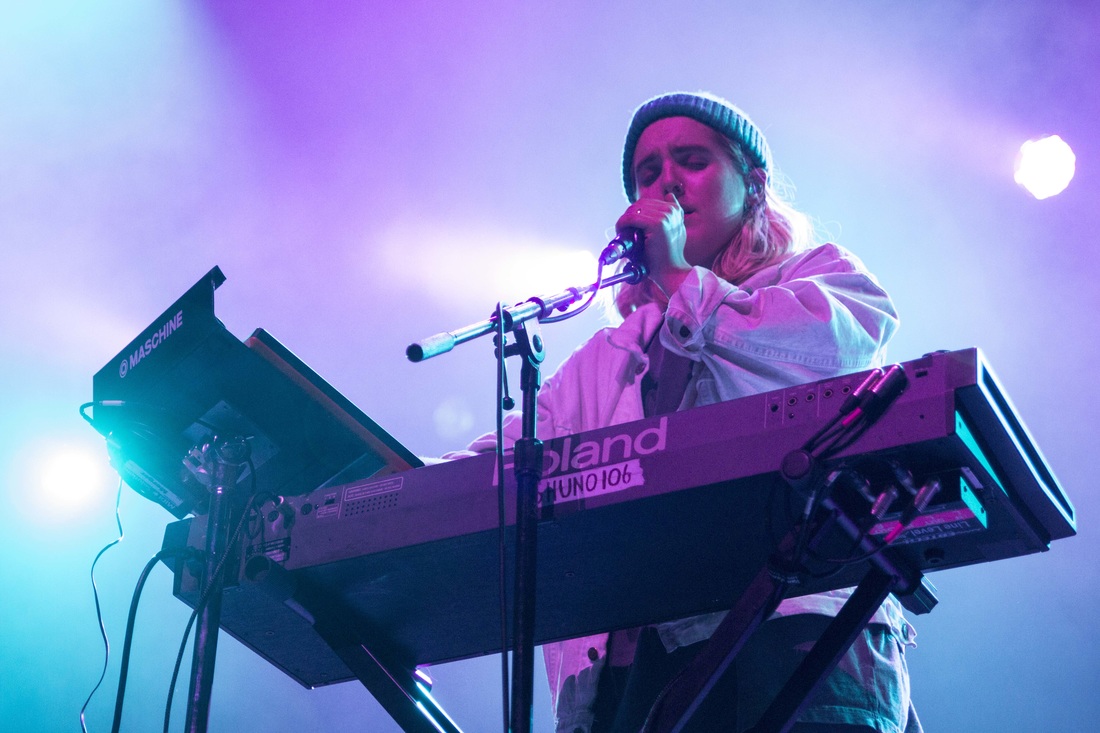 “I'm not normally this goofy, but the boys will tell you I'm always this goofy.”
-Shura

With a beanie on and drink in hand, Shura took the stage at the Fox Theater in Oakland on Oct. 1, 2016. Opening for Tegan and Sara, the English singer-songwriter and her two bandmates rocked their performance despite some technical difficulties.

Shura may have jinxed the set after her opening song when she introduced her other two supporting band members–one on electric drums and the other on keys and guitar–and her roadie James who is there “to make sure nothing goes wrong.”

On “What’s It Gonna Be?” Shura played keys in addition to singing, but she got tripped up by a pesky fly on her keyboard. She missed a line of her lyrics and a few chords on keyboard as she was deciding what to do about the unmoving fly that she did not want to squish. Shura’s mic also fell from its stand later in the song, where she caught it and continued to play keys while holding the mic in one hand. After the song, she walked down from the band's raised platform and talked to the audience about the “crazy things” happening on stage. Shura felt bad for the fly, she explained that it looked like it was dying and couldn’t fly. Pointing to her other band members, Shura told the audience, “I'm not normally this goofy, but the boys will tell you I'm always this goofy.”

“Kidz ‘N’ Stuff” was the third song up, followed by “What Happened To Us” which Shura dedicated to her electronic percussion pads because they didn’t want to play with her that night. All in good spirit and quick to shake things off, Shura got a laugh when she said to the pads, “This is for you, you little shit."

The band was set up in equally spaced areas dividing the stage into three parts. Shura was in the middle, the drummer on stage right and the keys and guitar player was on stage left. Confined to their own spaces, they did not move around too much because they were tied to their instruments. Shura even played guitar a bit where she was able to move around more. As beams of angelic light poured out into the Fox, Shura kneeled with her guitar to jam out with her other guitarist during the break in “Too Shy.”

Shura told the crowd that “Touch” was the first song she wrote for her album Nothing's Real. She began to sing the song while sitting on the edge of the stage before jumping down into the pit and walking along the barrier as she “touched” the hands of audience members. Smiling and laughing the whole time, Shura was surely likeable. After struggling to climb back on stage, Shura said, “That was my exercise for the next three years.”

Before going into “White Light” Shura explained, “This song is about being weird and falling in love with a UFO.” She ditched her beanie and her bleach blonde hair flopped around as she put her all into the song. The whole band was really into it, playing their instruments aggressively.

Shura thanked Oakland for allowing her to play her goofiest gig ever and waved goodbye before walking off stage.