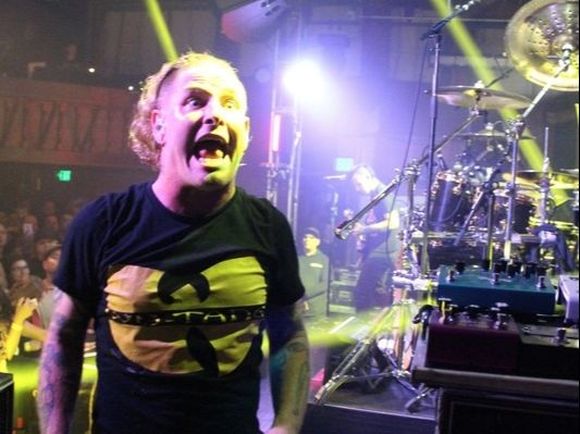 “I want to see every fist in this room in the fucking air!”
- Corey Taylor, Stone Sour

In celebration of their new album Hydrograd, Stone Sour played at the Troubadour in Los Angeles on Thursday, June 29, 2017.

Opening the show were young LA natives, The Pink Slips. Their punk vibe and energetic performance got the crowd moving and ready for Stone Sour’s upcoming set.

Los Angeles’ Troubadour proved the perfect venue for Stone Sour’s Hydrograd album release concert. With standing room for only a few hundred people, the club provided an intimate atmosphere. Frontman Corey Taylor also played off this, making the show very personal as he interacted with fans. The set had a little something for everyone including classic hits, older songs off the first album and brand new songs. For the first time in front of a live audience, Stone Sour performed “Mercy” which can be found on the new album. The energy never dulled as the band played every song as if it were the last one of the night. From throaty yelling to soulful vocals, Corey Taylor never ceased to amaze with his talent. Though the band as a whole played an amazing performance, Taylor no doubt stole the show with his everlasting energy and hype. The band ended the show with an encore consisting of “Gone Sovereign,” “Absolute Zero,” and “Fabuless,” as well as some crowd surfing by a shirtless Taylor. If this show is any indication of the new album, it for sure is something worth the listen.

You can listen to the new album here: ​stonesour.lnk.to/Hydrograd