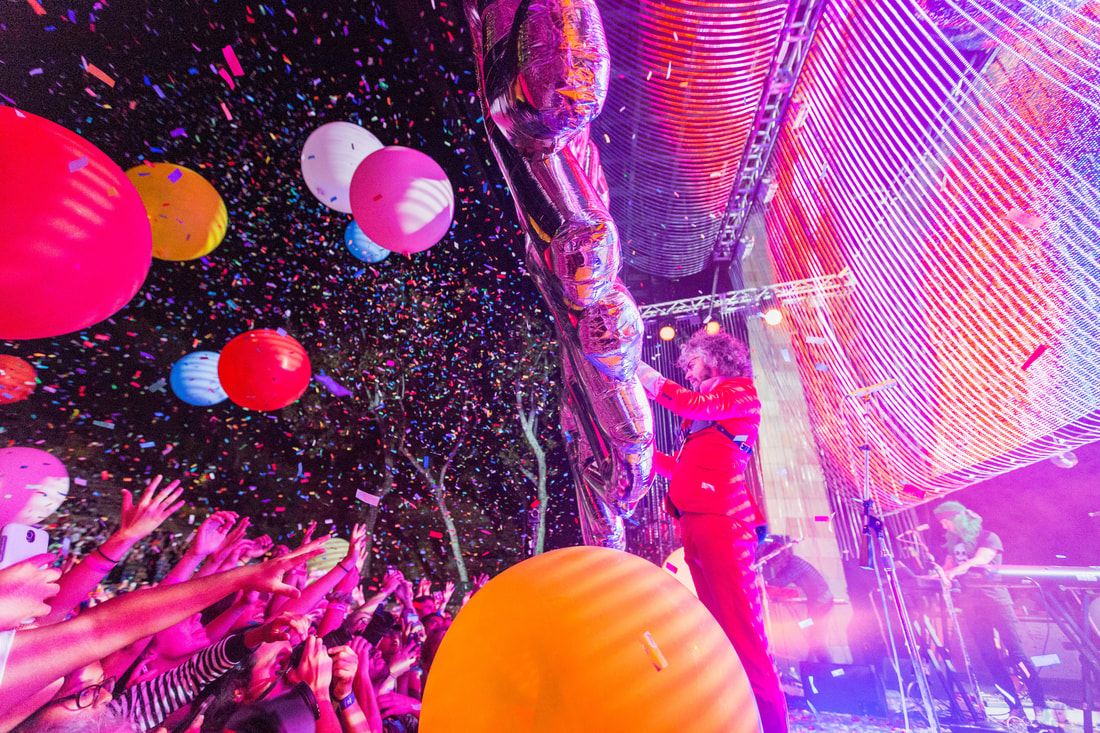 It was clear to see when arriving that the show for Friday at the Santa Barbara Bowl was going to be something a little out of the ordinary by the stage set up with giant mushrooms and LED stips everywhere, and by how the audience dressed, many in costumes. Wyatt and Fletcher Shears, twins that formed the band The Garden, had a 90’s punk vibe about them with black boots and studded metal and played a blend of music to start things off, switching between vocals, drums and bass guitar. They are a self described style called Vada-Vada which in 2015 Wyatt Shears described as  “an idea that represents pure creative expression, that disregards all previously made genres and ideals.” They certainly had some audience members there for them and seemed to have somewhat of a cult following in that respect. Drum and bass solos were frequent, as were rolls on stage, climbing and jumping around. Their music is certainly hard to describe, but it’s easy to say that they brought the energy up.

For another artist that somewhat defies simple classification, Mac DeMarco came out next with music often described as “blue-wave” or “slacker rock.” While certainly keeping the energy up, he told the audience he wanted them relaxed and enjoying the set. Their set is when the lights really started kicking in and the band was surrounded by rainbow LED’s, solid neons and black lights flowing smoothly to really set the tone to match their music. DeMarco’s easy way about him made time drift by with an atmosphere of lazy, but happy enjoyment.

The Flaming Lips were a departure from both previous groups as their story filled songs were accompanied by all sorts of props and set ups. Confetti cannons blasted out, lead vocalist Wayne Coyne shot streamers over the front, CO2 machines clouded the stage and giant balloons were released all within the first few songs. During “Yoshimi Battles the Pink Robots” he stood in between the legs of a massive inflatable pink robot, then during “There Should be Unicorns” he went out into the crowd riding a unicorn lit up with more LED strips. Showmanship was clearly on their list of priorities, but the music went right along with it, not to be outshined by anything.
​
View Full Photo Gallery