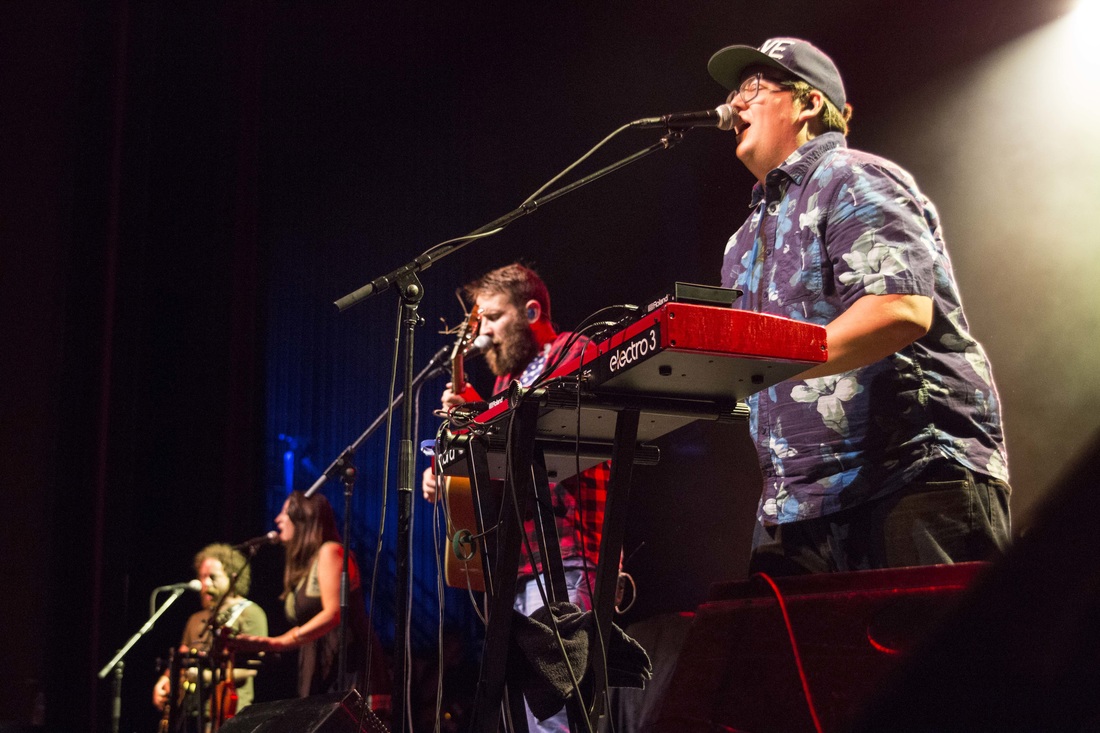 “I want to play a fast one and Dave wants to play a slow one, so based on audience participation, I anticipate he's going to win?”
-Simon Ward

Six-piece Canadian band The Strumbellas showed their light-hearted nature and won over the audience from the moment they took the stage at the Fox Theater in Oakland on 9/20/16. Before going into their first song, David Ritter on the keys jokingly announced, “We are a rock n roll band!” After playing their first song, vocalist Simon Ward asked the audience if it would be okay to untuck his red and black checkered flannel. Chuckling, he said, “It feels like there is an anaconda around my waist.”

There was a lot of banter between the band members, especially between Simon and David. In between songs, audience members yelled “Hi David!” Simon was a little jealous of the attention as the audience seemed to know a lot about David. Commenting on David’s energy, Simon said, “That is synthesizer kungfu right there, Mr. David Ritter!” Simon went on and wryly joked with the crowd, “I want to play a fast one and Dave wants to play a slow one, so based on audience participation, I anticipate he's going to win?”

The band was animated throughout their set and joked about their crazy Canadian dance moves. Simon pretended to conduct the band while they played “We Don’t Know.” Guitarist Jon Hembrey and bassist Darryl James jumped around on songs while violinist Isabel Ritchie captivated the audience with her beautiful melodies and drummer Jeremy Drury passionately kept the beat. The band had a democratic nature. With their comradery, no one seemed to command a leading role. They all talked on stage and interacted with the crowd. Their passion and love for what they do rubbed off on the audience and created a fun environment for the entirety of their performance.

One of the audience members in the front row held up a sign that said it was her 21st birthday. The Strumbellas acknowledged it in between songs and Simon asked, “What’s your name ma’am? Where are you from?” She responded that she was from the San Francisco Bay Area and as if he didn’t hear said “I’m sorry.” She repeated herself and Simon responded, “Oh I heard you, I’m just sorry!” Laughing he continued, “That joke would have worked a lot better if you weren't from the area.”

The band had amazing acoustics in the Fox Theater. They were thankful that the audience came early to see them perform before Cold War Kids and thanked the Fox for having them. David said, “This just might be the most beautiful venue we have ever played at. It's a real privilege and we are so happy to get to share this with you guys tonight."

Before going into their song “Wild Sun,” Simon said, “Oh come on, what is this, Los Angeles? Are you ready?!” The audience was definitely ready. They sang along and the band stomped and clapped on stage. After the song, Simon said, “You guys are great singers, could I get everyone's picture?”

Finally, it was time for The Strumbellas hit song “Spirits” that the Bay Area has heard on the radio a lot lately. The audience went wild singing. The band played an extended version of the song as Simon payed respect to all the band members and individually introduced all of his “best friends in the world.” They went back into a pseudo-acapella version of “Spirits,” only backed by Jeremy on drums, before the whole band came back in. The Strumbellas ended their set with more light-hearted joking as Simon tried to move David’s mic away from him.