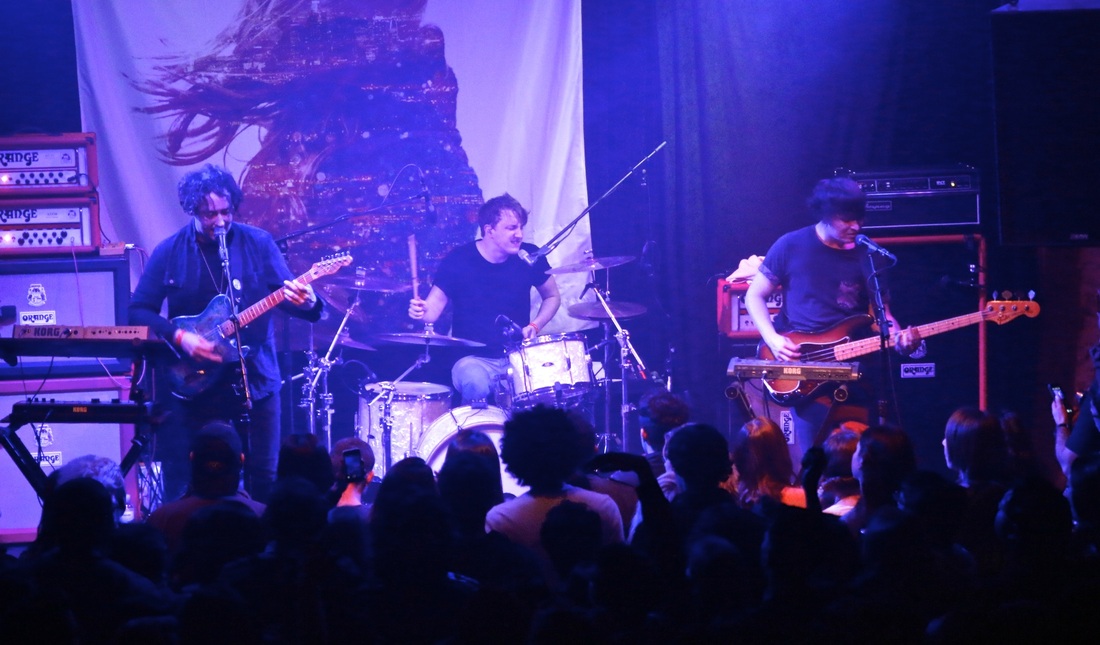 The Wombats
During the first song of their set, "Your Body Is a Weapon," singer/guitar player Matthew Murphy's amp experienced some technical difficulties which led drummer Dan Haggis to say, "So this could be one of our more experimental shows."

Ivy Levan opened for The Wombats at the Rickshaw Stop in San Francisco, CA on 1/22/15. Although The Wombats are an English band from Liverpool, Ivy Levan is an American singer, model and actress who made her acting debut in Drop Dead Gorgeous in 2010 and in 2013 supported Fitz & The Tantrums on their US tour. During her set, Levan danced around the stage and there was never a dull moment in her performance. The Wombats had a major setback in their set when during their first song Murphy's amp went haywire. After the song, bass player Tord Øverland Knudsen commented, "That's a nice sound isn't it," as the amp screeched and Murphy said, "I'm so glad I'm semi-drunk right now." As the Wombats roadie worked to try to fix the amp, Haggis singlehandedly saved the show in what became almost a comedy routine. He took a poll on what the fans thought had gone wrong asking, "If you think it's the guitar put your hand up! What about the amp? What about the Wombat curse?!" At which the crowd began to chant, "Wombat curse! Wombat curse! Wombat curse!" Finally Murphy became very frustrated when the amp problem was still not solved and said that the band was going to go back stage as they tried to resolve this. As Murphy walked off the stage, Haggis stayed at his drums and exclaimed, "Fuck that! I'm just going to sit here and take it. We're not going to solve anything sitting back there." The crowd was rilled up and requested a drum solo. Their request was not only matched but exceeded when Haggis and Knudsen played a short improv drum and bass duet. The amp was finally fixed to the point where it was usable, although it still was not in good condition. Murphy came back out on stage and the band claimed it was the reverb petal that was the problem. The Wombats jumped right back into their set with "Jump Into The Fog." Throughout the night, they continued to have difficulties with the amp and Haggis continued with his standup comedy which the crowd loved. At one point Haggis asked, "Anyone have any more jokes?" to which Murphy replied they needed something "more like a novel." Despite all the delays, The Wombats still played their full set, promoting their highly anticipated album Glitterbug which is scheduled to be released this April. The band said, "We managed to make a new album despite what you've seen on this stage." And despite all the technical difficulties, everyone still enjoyed the show and fans yelled, "We still love you!" The Wombats will be touring overseas until late April when they will return to the US to continue their tour.
View Full Photo Gallery