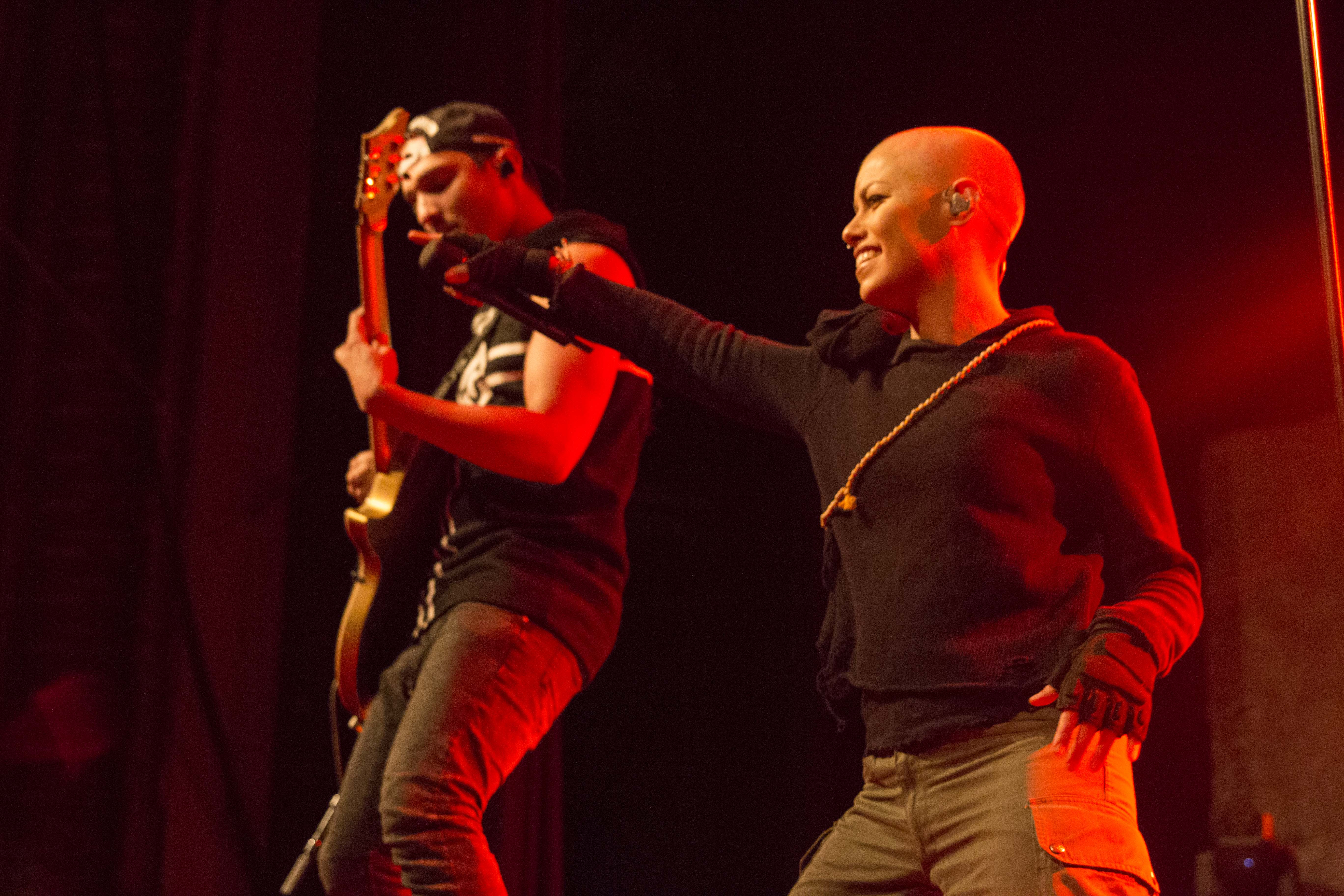 Tonight Alive was the second of four acts to perform on the End the Madness! Tour headlined by Sleeping With Sirens at the Warfield in San Francisco on Nov. 28, 2016. The Australian rock band busted out their classic pop punk hits, characterized by singer Jenna McDougall’s clean and upbeat vocal runs. McDougall stopped to talk to the audience in between sets about personal power and freedom. With a newly shaved head herself, McDougall has become a symbol of counterculture in the music scene through her individuality. She wasn’t afraid to be herself and give a dynamic performance that involved dancing around the stage, spitting to emphasize song lyrics, and a smile that never left her face. The entire band was hyped for their set. There was constant movement and guitar spins were not uncommon. All the band members seemed to be fans of the three metal box steps that they set up on the edge of the Warfield’s stage, striking poses on them while playing guitar or using them as leverage to jump higher.

Between songs, frontwoman McDougall discussed how she loves that concerts bring people together to experience acts of passion, not just at Tonight Alive’s shows, but for any band that takes the stage and even between sets when the house plays a song and the audience sings along. McDougall explained how the band is motivated from these experiences. She said, "We get to see you guys experiencing music and experiencing passion and that inspires us each and every day."

McDougall stood out as a true performer since she would make lots of eye contact with audience members as she sang and would smile after every song. With so much engagement, there was little divide between the band and the crowd. Absorbed in the music, Tonight Alive had the ability to make you forget where you were.

When the band performed “Waves” from their newest 2016 album Limitless, McDougall requested that the audience sing out the line “Your love comes in waves.” Fitting this beach theme, McDougall also requested that fans throw up shakas instead of screaming if they were excited for State Champs who was up next to perform.

It was interesting that on this tour Tonight Alive opened before State Champs since the lineup was previously reversed when both bands also opened for All Time Low on their early 2015 tour. Although some might take this as a drop in the band’s popularity, it seemed like the crowd overall enjoyed Tonight Alive’s performance more than State Champs’ since their set had more variety and due to McDougall’s natural charisma. It was obvious that Tonight Alive was having fun on stage and genuinely enjoyed performing and sharing their music with others. Even for fans that came just to see Sleeping With Sirens, the audience couldn’t help but to fall in love with Tonight Alive over the duration of their set, confirmed by many fans yelling out in between songs, “We love you!”

Emotional and expressive, Tonight Alive kept up their energy on slower songs when the acoustic guitars came out. Before going into “Drive,” McDougall said, "You have seen the movie Clueless? You all very clearly remember the party seen while rolling with the homies? I want to see some rolling with the homies in this chorus!" Her wishes were answered as the crowd jammed out as she did a hula dance and belted out the song.

Before playing “Lonely Girl,” which ended up being their final song, McDougall stopped to give a little speech that sounded more like a rehearsed poem that she wrote. Regardless if it was pre-planned recitation or not, McDougall was a gifted speaker and her words were captivating and empowering. She discussed how we can not let others control us and that we have choice. In response fans yelled out, “Preach!” She talked about how beauty products are based on standards that are warped and said, “We are easier to manipulative if we believe we are weak.” This type of rhetoric went on and McDougall continued, “We can transform the world we live in if we use our voice. We don't agree with society and we don't submit to fears. We shouldn’t take what is being prescribed.”

After they finished playing their final song, McDougall encouraged the audience to put their middle fingers in the air and ended the set with a flurry of emotion. With a smile on her face, McDougall said, "It feels good, doesn't it?"