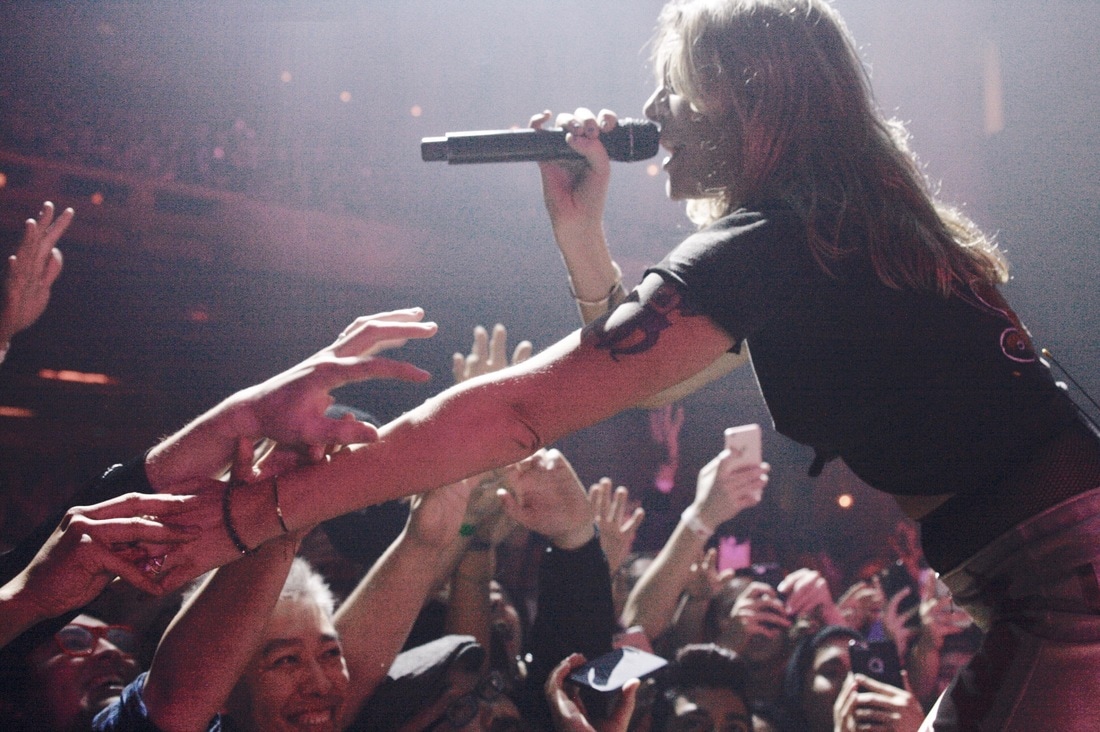 Phoebe Ryan is a singer-songwriter who seems to work mostly behind the scenes, writing hit songs for major artists ranging from Britney Spears to Tritonal. I was interested to see how Phoebe Ryan would be as a performer. She was technically good, displaying the same vocal range she has on her recorded tracks, but she had a unique energy that was both slightly awkward and pumped up the crowd. To me it seemed like she was shy and overcompensating by trying to be more lively, but the realness in her excitement to play her music on stage translated to the audience. I appreciated that she was animated, talking a lot on stage and trying to make a connection with the crowd. It was more than just about playing the music, her body language and expressions helped tell stories through her songs.

One fan held up a sign that asked, “Will you be my Valentine?” Phoebe Ryan accepted this invitation and said that her favorite flowers are daffodils. She played her hit songs such as “We Won’t” and her mashup of “Ignition / Do You...” as well as live debuting a new song. Phoebe Ryan told the story of how she met Tove Lo at a party and they bonded over Phoebe’s stolen jello shots. Amidst pointing out how she got distracted by people making out in the crowd and thanking people for “wiggling” or dancing to her music, Phoebe Ryan showed her appreciation and said, “Thank you guys so much! My glasses are fogging up, I think I might be crying. What a baby!” She played “All We Know” by The Chainsmokers that features her vocals and changed the lyric “From Chicago to the coast” to “From San Francisco to the coast” to fit the Bay Area. She ended with her new song “Dark Side” that she had released the previous week and said, "If you like me, check me out on the Internet. I'm all up in the World Wide Web!"

Tove Lo brought her all to the Lady Wood Tour. With a backlit curtain drop, Tove Lo made her entrance. The crowd packed in to see the true-born performer. She had a stage extension that went right up to the barrier so she could be directly next to the audience, where she reached out them and even blew glitter, creating a magical aura. The smokey atmosphere along with the lights made Tove Lo an angelic figure. Although the show focused on the tracks from her new album Lady Wood, Tove Lo also made sure to pay respect to songs from the Queen Of The Clouds era.

Hair flips and banging on a clear tom drum included, Tove Lo knew how to keep the audience entertained. Her characteristic sensual dancing held throughout the show and she had the crowd swaying with her and even holding their middle fingers up to the lyric “you can point fingers all you want” from the song “The Way That I Am.” Tove Lo was looking to be flashy, from her metallic silver pants that said “Lady Wood” across the butt to literally flashing the audience during “Talking Body.” She also talked about her amazing time in Nicaragua, a trip she took with Phoebe Ryan. Tove Lo explained that she wrote the song “Vibes” on this Nicaragua trip, which inspired the sounds that bring about the jungle vibes in the track.

I thought it was really cool of Tove Lo to take the time during her show to thank her crew and the audience, she said, “It takes a lot of people to pull off something like this, and of course it takes all of you.” She humbly continued, “‘Habits’ took off, but it was a long time of just me believing in me.” Before going into “Imaginary Friend” Tove Lo said, “This song is about trusting your gut and believing in yourself.” She played the song on keyboard as she sang and the slow, live version that had an intro not initially backed by her band. It was very different than the studio version, and honestly I liked it a lot better. The live performance of “Imaginary Friend” was true and honest, open and confessional, and overall just raw, like opening a wound within her.

For her encore, Tove Lo played “What I Want for the Night (Bitches)” followed by her most popular song “Habits (Stay High)” during which a fan on someone’s shoulders flashed her and she responded, “Thanks for the flash babe.” The night surely ended with a bang and the Bay Area will have to patiently wait for the return of their favorite cool girl Tove Lo.
View Full Photo Gallery