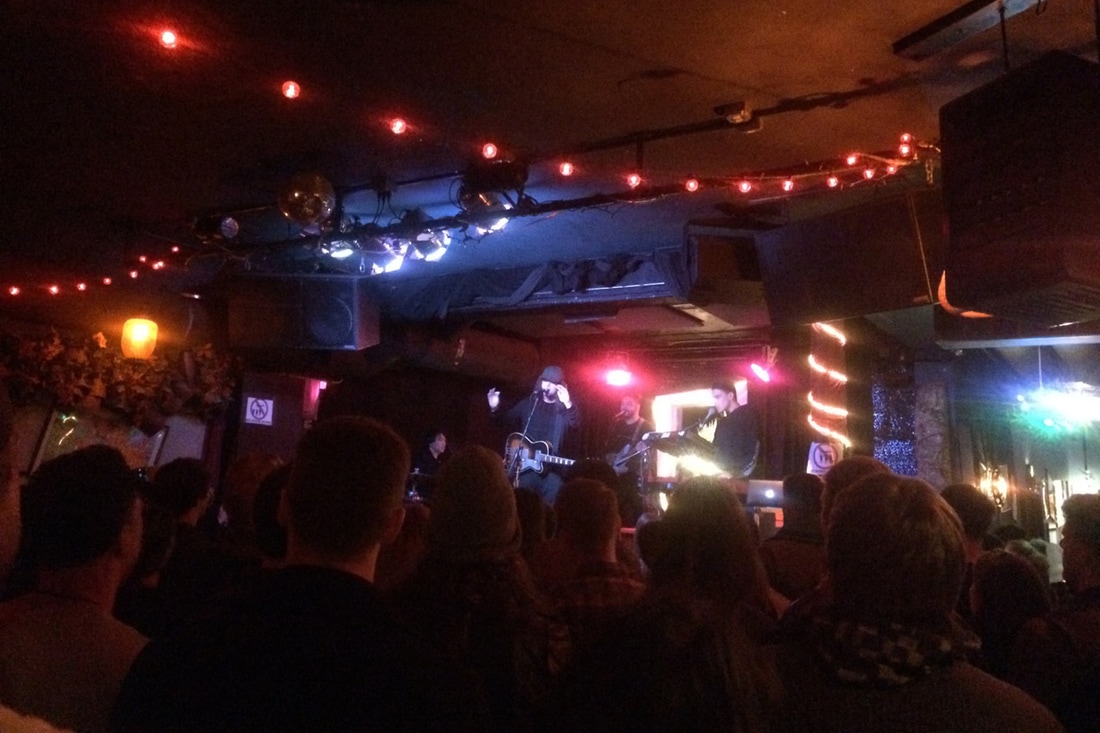 Vancouver Sleep Clinic may be from the other side of the world, but they were joined by local artists Brolly and Krishan Abeyatunge on Wednesday, May 17 at Bottom of the Hill in San Francisco. Filled with listeners who were familiar with the artists and those just looking to hear live music from a new group, Bottom of the Hill had a mix of people as diverse as the city itself. The small, laidback venue proved to be a fitting atmosphere for the singer-songwriters, each bringing their unique voice and vibes to the night.

Brolly jumped on stage to open the night and instantly the audience could see he was a NorCal local. Dressed in a simple T-shirt, jeans and hat, he belted his unpretentious and heartfelt ballads for the growing crowd. Singing of love and home, he played stripped down selections from his EPs Hollow Home Rd and Wolfe as well as singles. The lyrics of songs like “Ghost Town” and “Love Grew Legs” felt deeply personal as he stood on the stage alone delicately picking and strumming his guitar. With the string lights hanging above and garland along the walls, it felt as if we entered a backyard jam session in Brolly’s hometown of Sacramento.

Accompanied by a bassist, Krishan Abeyatunge picked up the beat with a more light hearted note. His whimsical lyrics varied from the fantastical to the political. Early in his set he shared a song about his meeting with a gnome when he was young and later told the story in a song about a wizard working to save the world. His most memorable song “was inspired about our president.” The San Francisco native passionately strummed and sang of a narcissist, capturing his hometown’s attitude in the current political climate. Echoing the city’s spiritual lifestyle and appreciation for hidden treasures, he closed the show by thanking the audience for their energy as well as the “dope ass underground venue that's still doing it after all these years.”

Not long after, the venue filled with heavy drum beats, synth, and humming. Vancouver Sleep Clinic opened the second night of their North American Revival Tour on a powerful note. With the recent release of their first full length album Revival, the Brisbane-based Tim Bettinson offered his ethereal sound to the local venue. Combining songs from their 2014 Winter EP and their new record Revival displayed the development of the young group’s sound over the years. Older songs, like “Flaws” and “Collapse,” were lighter, softer and vocally-based while the newer songs, including “Killing me to Love you” and “Lung,”  incorporated more instrumentation and edgier melodies. Between songs, Bettinson shared antidotes and expressed how this tour and record were a dream come true for him. He joked about their misleading Canadian-inspired group name, as they are Australian, and he confessed the homesickness he felt while working LA which led to his heartbreaking yet hopeful single “Someone to Stay.” The group closed their set with an encore of “Vapour,” the first song Bettinson ever wrote. Vancouver Sleep Clinic delivered a short and sweet show that introduced the young group and made new fans take notice of the rising band.