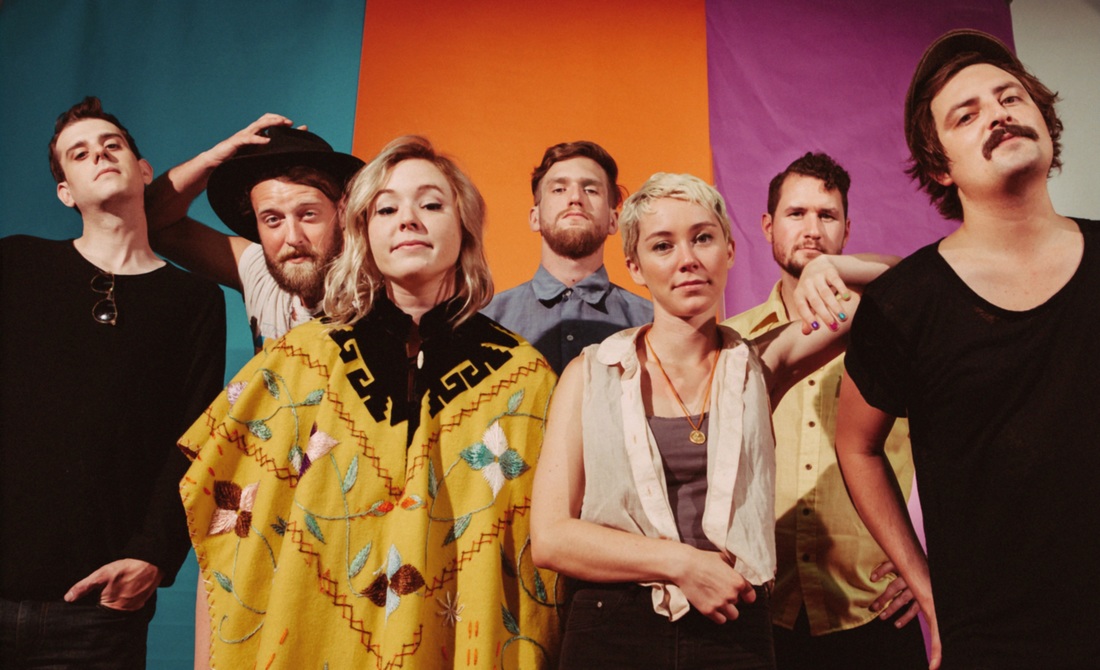 Photo Courtesy of All Eyes Media
Review by McLane Brown
One of the key ingredients of Wild Child’s third album, Fools, the intertwining voices of lead singers Kelsey Wilson and Alexander Beggins, is a consistent part of what keeps the album, and the band strong. Their voices complement each other; Beggins providing a steady counterpart to Wilson’s much more playful and adventurous voice.  Evan Magers comes in on keyboard during songs that had a strong focus on the piano, Sadie Wolfe provides the cello offering a somber yet sweet tone, D’Annunzio on bass and Drew Brunetti on drums start the album off strong in the song "Fools" with a grooving bass and drum line, and Matt Bradshaw adds in on solos and countermelodies.

Compared to their other albums that started them off with a much more mellow feel featuring the ukulele, the new album depicts a more diversified tone. It is similar to The Runaround that had branched out a good deal as well. Their songs makes any listener feel as though they are frolicking through the music without a care. Oftentimes, it is easy to overlook how they are really growing and developing as group, with more complex instrumentation and lyrics.

The little duality between Beggins and Wilson’s voices is similar to the difference in the instrumental part of the music that is typically lively, energetic and cheerful, and the lyrics that have much heavier themes throughout. They often deal with heartbreak, but also aspects of our lives that can’t be changed that seem to tie into the title of the album, Fools. It could be taken to mean that sometimes our assumptions about a situation make us fools, because we expect things that we honestly have no control over.

This can be clearly seen is various lines in the song “Stones”, like in the opening line “Thinking I'd like for you to take the time to call me back”, and later when they sing “I hear your voice just checking in to see if I'm okay / Hold her in your arms and think of what I used to mean to you / Say it hasn't changed but can't tell me what I'm supposed to do.” These ideas, together with lines like “Have you thought of what it really means now to let somebody in / If I said I'm ready now / Would you darling show me how” from Meadows connects the two ideas of foolishness and love into something quite profound that many people can relate to feeling.

​​Many of the songs start off pretty quiet, very reminiscent of their first album in my mind, but transition and build up to something that’s a good reminder of diversity that the group is capable of. Bad Girl,one of the more pop-like songs, comes right after Oklahoma that sounds much more like something from their previous album The Runaround. Each has a distinct sound that screams Wild Child, through and through.

In the days before photographing them for the first time live, I remember listening to their first two albums and being very curious how they would sound live because of the mellowness that was very easy to pick up on in the recordings. I can only say that I was surprised in the absolute best way when they came out and played those same songs as the albums, but with an entirely different spin on them that I loved, because it was filled with excitement, power, and emotion. Their interaction with the crowd was something that really spoke to me, like when they went out into the audience to play a song unplugged, and invited other bands Desert Noise and Goodnight, Texas up on stage with them for the last song. Then, Alexander smashed his ukulele and threw the pieces out into the crowd which just gave the whole performance a homely feel, as strange as it may sound, because it was the end of their tour and having everyone out there together was a great way to end it. The small venue at SOHO music club in downtown Santa Barbara added to the homey feel with brick walls and wood floorboards that resonated the music all night, and added to the warmth of the songs.

I only add this in because this was the feeling and memory that came to mind when I listened to this new album for the first time. It had all the energy that I remember from that show in some songs, but also added in new elements and looked back in small ways to their first songs. As a whole, it really lets the listener know that they would be a fool to expect anything else but the unexpected from Wild Child.
​