​Student Musicians – a column about college student musicians, featuring their work and focusing on how they navigate school and music! ​​ 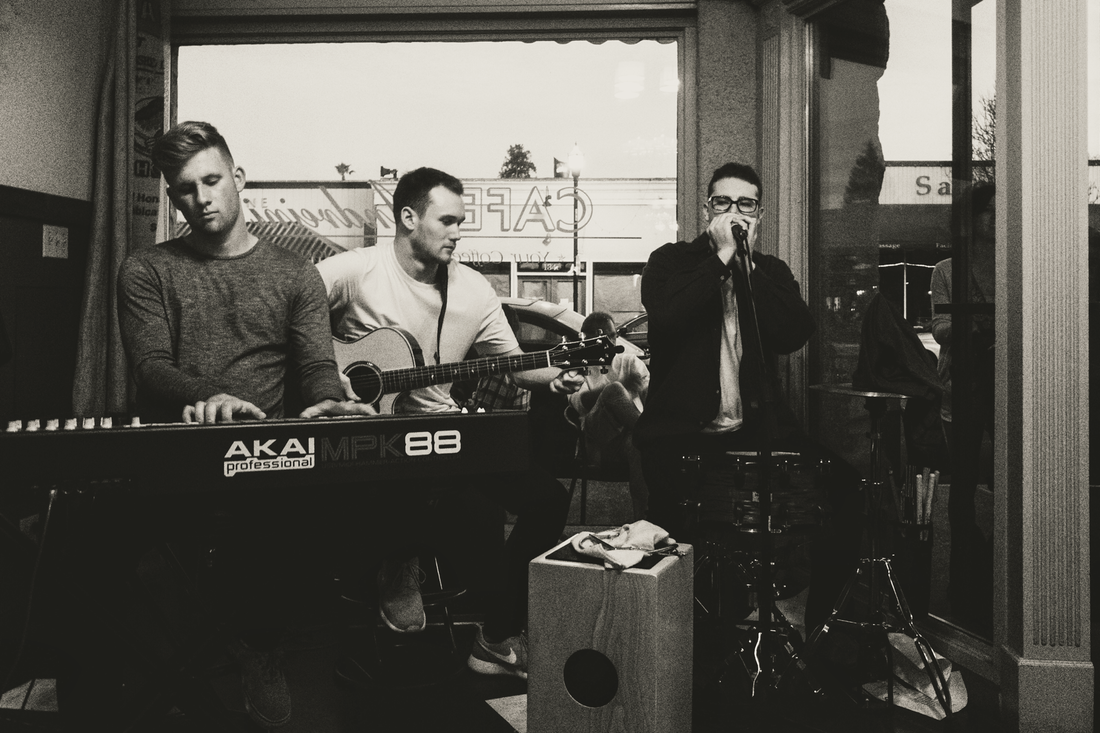 Shooting a video on a roof already has challenges in itself. Add in a full moon, rain, wind and a fire. What is left? The memories.

Despite the challenges that night on the roof, Nick recounted that as his favorite band memory. One of the band’s friends, videographer Winston Stearns, was in town. When Nick saw the full moon that night, he instantly wanted to film a video with it. “Winston and I got huge lights, 800 feet of extension cord and we get up to the top of the roof, pass out our guitars, keyboards up this small ladder,” Nick said. “The whole roof is curved, it’s raining, windy and we are trying to film our video up there.”

However, the worst was yet to come. “Then the light blew down and caught on fire and it was so windy that the sound was terrible,” Nick said. However, Chris pointed out that the one thing they saved from that night was the memories they shared.

Despite the simplicity of their band name, Jordan said that it was the hardest thing for them to come up with. “For us, it kinda means music is our ground. It brings us together and it will hopefully bring other people together,” Jordan said. “Whatever our passions are, we keep it simple.”

Their music falls under the genre of alternative pop. “When we put our album out, iTunes put us in the pop genre category,” Nick said.

Before the EP, they had a singer-songwriter influence and they kept their sound mostly acoustic. They knew it was some sort of pop, but not the kind of pop that comes on the radio. Nick described it more as alternative pop.

MUSIC AT AT YOUNG AGE

They had all been involved with music at a young age. Jordan first picked up the guitar at age 10 and he hasn’t put it down since. When Nick started the drums, there was no going back. And Chris, he never imagined his life without music. ​
​
Photo Courtesy of The Simple Society
WRITING SONGS

As cliche as it sounds, their freestyle jam sessions are where they get the most inspiration for their songs. Whenever they are writing a new song, which they all collaborate on, it never starts from the same point. “It usually starts with the music. The music will come first and then the lyrics,” Nick said. “It’s very rare where - for me, at least, when I write - that I can just ‘oh here’s my lyrics’ but there are some instances where it’s poetry-esque lyrics.”

When the lyrics do come first, there is more meaning. “The Game” was written mostly by Nick because it focuses on his own personal experience. “In those cases, I think that those songs - as far as lyrics are concerned - speak a more powerful message,” Nick said.

It is really about capturing all the ideas. Nick said, “Sometimes you will capture moments of complete garbage. But at least when you’re going back with the guys, you can share that thought. And in the moment that you might have recorded it, it was a great thought, but in reality, you come back to earth after being on cloud nine and you’re just like ‘ok that was absolutely terrible.’ So you go back to the drawing board.”

For Nick, school comes first. He is a four year college student and wants to make that a priority. However, in class his mind tends to wander. “In class, I catch myself daydreaming that music is what I want to do,” Nick said. “That’s the price you pay for having extreme passion.”

Chris is the opposite. He puts music as a priority and wants to attend a four year university with music as his major. Despite still being a junior in high school, Chris has managed to create a harmonious balance between his academic work and music.

They are working on an LP right now and promise to put out a single. Stay tuned to check out what’s next from The Simple Society!