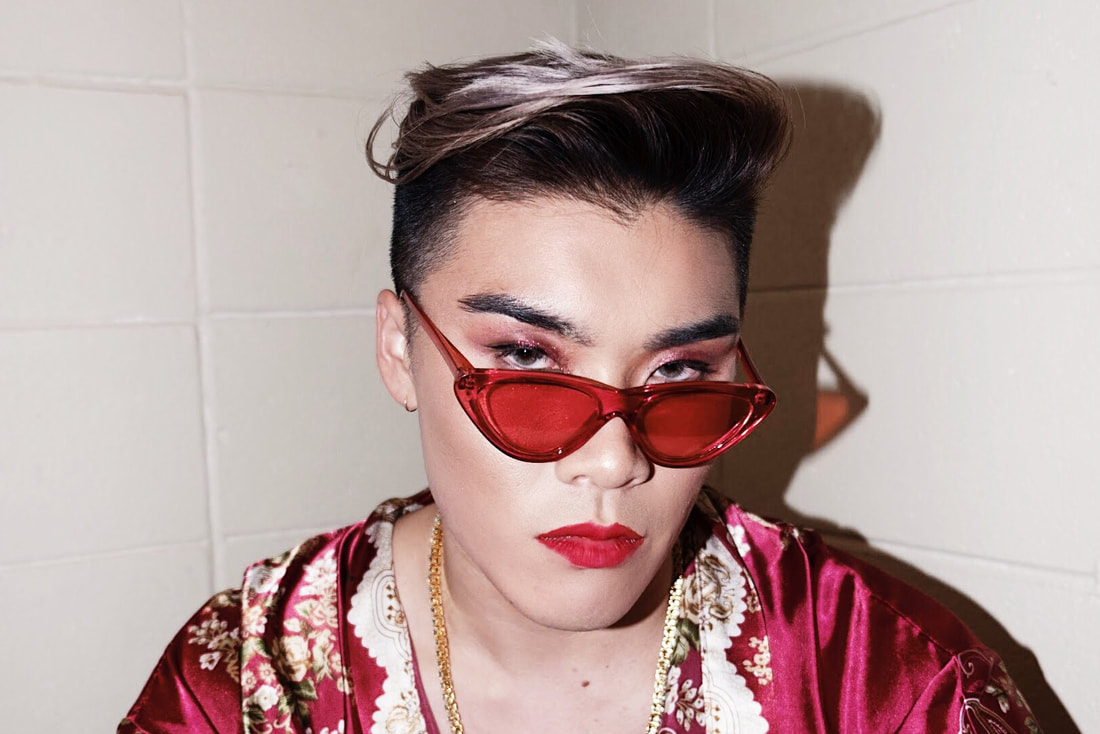 A genre and gender-fluid artivist, music producer and singer-songwriter, Wulfzhang refuses to be categorized and put in a box. Originally from San Jose, Wulfzhang is the artist persona of UC Berkeley senior Kenny Zhang who is majoring in business and minoring in music.

Last month, Wulfzhang released their 3-song debut No Angel EP. The self-produced EP explores the queer experience in relation to sexuality, mental health and liberation during a period of self-discovery. Evocative of The Weeknd, No Angel has dark overtones rooted in pop, electronic, and trap music.

A very personal DIY project recorded in their bedroom, Wulfzhang was honest with their lyrics and first-hand accounts of queer experience, which commonly lacks representation within music. Looking at No Angel as a whole, Wulfzhang said, “Each song on the EP has to do with identity and what the relationship of being queer is to this world – how people view you and how that makes you view yourself – and trying to navigate feelings of self-doubt, but also empowering yourself with community.”

Wulfzhang began producing original music in 2014 after their brother lent them a mini keyboard, although their musical journey began over a decade before that, picking up piano, violin and guitar at just 5 years old.

The name Wulfzhang stems from their real name and culture, alluding to the mystical, gender neutral word ‘wu’ which means shaman in Mandarin Chinese. Additionally, they noted that the german spelling ‘wolfgang’ is musically-oriented, referencing Wolfgang Mozart. They said, “I am not comparing myself to him, but it is a cool similarity to have.”
​
​Wulfzhang first began writing the EP two years ago with “Jet Black,” a song about navigating a friends with benefits relationship that went south. As the leading track of the No Angel EP, it sets the foundational mood. The EP is laden with distinct and pronounced vocal distortions, crafting unique melodies through manipulated effects. Wulfzhang explained how all the instruments on No Angel are synthesized, “The guitars you hear, the pianos you hear, everything was just based off of one keyboard.”

Next, Wulfzhang conceptualized “Hell to Pay” after the reaction to the 2016 election. As violent protests erupted around the events with Milo Yiannopoulos in Berkeley and other politically charged happenings across the country persisted – specifically with regards to changing laws about queerness like the transgender military ban – Wulfzhang used this song as a form of protest. They said, “Being in Berkeley, there was a lot of very heated emotions regarding that and I think that was a good outlet for me to express it.”

The song samples a sound bite from a speech given by influential transgender activist and Orange is the New Black star Laverne Cox in addition to students reactions from newsreels during the Milo protests in Berkeley, black lives matter chants, and a moment where citizens interrupted a supreme court hearing with anti-Trump cries. The powerful auditory sounds of protest swell and culminate into a fever pitch. Wulfzhang explained, “I put all of them together because I think they all had kind of different perspectives of what was going on in this country and I think they all deserve to have a platform to share their movements and frustrations.”

Last summer, Wulfzhang rounded off the EP with title track “No Angel.” The song is a story of survival within modern contexts and draws upon struggles of feeling like a sin. Wulfzhang delves into the queer experience and reclaims the belittling words that others have said, using them as empowerment.

The seemingly happy melodies are deceiving, overridden with deeper meanings when listening closely to the lyrics. With multiple layers, it is music that people can both dance to or dive into mentally, reflecting upon their own life stories.

Wulfzhang has synesthesia, a perceptual condition that allows them to see color and even feel certain textures when they hear music. Other notable musicians with synesthesia include Kayne West, Lorde, and Frank Ocean – all of which Wulfzhang looks up to as artists and draws from for inspiration.

With cohesive EP visuals, Wulfzhang highlights the color red in their promotional album art with roses, blood, lipstick and high heels. They said that it represents passion, anger and fire – reinforcing many of the emotions that went into the creation of No Angel – while celebrating femininity.
Opting to miss Coachella to play their first live show, Wulfzhang will be performing this Friday April 13 from 7-10pm at Looking Queer: Unbound Bodies Queer Art + Fashion Show, an event hosted by Oscar Wilde, UC Berkeley’s queer cooperative house. Looking forward to the intimate setting and a night of sharing stories through art, Wulfzhang said, “I really love that it is at the queer co-op, the Oscar Wilde co-op, so it's really focused on our experience and uplifting the voices of queer community.”

The live production visuals will construct a space where the audience will be drawn into the No Angel landscape that Wulfzhang envisions when hearing the music, including settings with fire and broken glass. For their upcoming performance, Wulfzhang said, “I wanted to build a whole world of where the EP takes place and when you go into that world these are the things you see, these are the things you experience.”

Wulfzhang hopes that people will leave the show feeling invincible and that they can do anything. They said, “No matter if you are queer or not, you can still enjoy the music and there are still feelings you can resonate with regardless. Like ‘Jet Black’ is just about unrequited love and ‘Hell to Pay’ is just about people saying that you are not good enough. I want people to feel empowered in that space.”

With time being of the essence, Wulfzhang starts many of their songs with a creative spark over breaks and then finishes them when school is in session. Since Wulfzhang was in charge of their own deadlines, they had to be really organized during the semester and schedule out blocks of time to get everything together, sacrificing a lot of sleep along the way.

Wulfzhang encourages other college musicians to be genuine in their music, pursue their own style and find a community of other creatives on campus. They also emphasized the importance of distributing the music and marketing with a rollout strategy.

Post-graduation, Wulfzhang plans to move to Los Angeles to continue working in the music industry. They are currently working on an album that will be more evocative of Hans Zimmer with more epic, cinematic sounds while still infusing pop and electronic elements. Wulfzhang said, “Expect a very different sound than No Angel, but still true to my roots of my musical style.”